United States – In the USA, a group of Milwaukee pastors has asked the city to make US$ 50 000 available to fund a one-time gun buyback programme. The project would allow residents to hand in unwanted weapons anonymously for recycling and thus help reduce violence in city neighbourhoods. 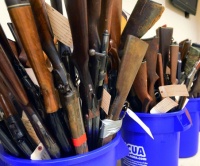 Midwest Forman Recycling (MFR) and Miller Compressing have already voiced an interest in participating in the venture. According to MFR’s Marty Forman, his company will support the take-back initiative by offering gift cards for up to US$ 200 for discarded handguns, rifles and assault weapons.

Guns would be melted down and turned into gardening tools, he adds. ‘I am very excited about this and I’m trying to get more recycling companies involved in this,’ Forman has told the Milwaukee Wisconsin Journal Sentinel. ‘There have been far too many senseless shootings in our city.’ Milwaukee police statistics confirm that homicides involving firearms increased 22% in the city last year to approaching 70.

Mayor Tom Barrett and police chief Edward Flynn have met with the pastors in recent weeks about a gun buyback and are in favour of the recycling push. The next step is to source funding to support the initiative.