Japan – A man-made island in Japan’s Tokyo Bay harbouring 12.3 million tonnes of household waste has been pinpointed as the perfect spot to host the 2020 Olympic Games.

Umi-no-Mori, which literally translates as ′sea forest′, is regarded by Tokyo officials as a highly sustainable venue for the Games. The project will see the complete transformation of a ′mountain of refuse′ spanning 88 hectares, starting with the planting of 480 000 young trees. The stadium will cost an estimated Yen 10.9 billion (just over US$ 1 billion).

The former waste site already hosts a marine park with up to 50 species of tree, including the Oshima cherry, which were planted by 16 000 volunteers using donations from local residents and businesses. This landscape sits atop a foundation of heat-treated sewage sludge, compost and fresh soil. Officials ensure that the waste has largely decomposed while methane gas emissions are directed by pipeline to a nearby power plant.

Architect and project chair Tadao Ando describes the island as ′a symbol of a recycling-oriented society in a mega-metropolis that continues to struggle with a waste problem′. He adds: ′Through this project, we wish to communicate the message of ′′living in harmony with nature′′.′ Or as the metropolitan government has put it: ′It′s an attempt to convert a negative relic of the 20th century into a positive asset.′ 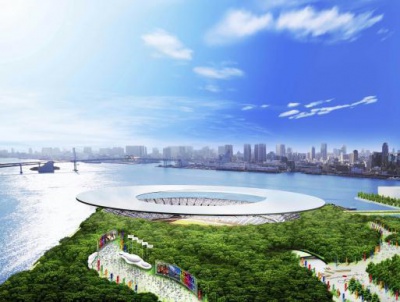