Ireland – Animal rights group PETA (People for the Ethical Treatment of Animals) has come under fire for launching an advertising campaign ‘inspired’ by human remains discovered at the Thorntons Recycling Centre in the Irish capital Dublin on August 7. A new poster shows a leg served on a plate with the words ‘meat is murder’ – but local councillors have complained that this does little to edify the discussion on sustainability or social awareness.

The design for PETA′s new billboards is ′sick and disgusting′, says Dublin councillor DaithÃ­ de RÃ³iste. ′An investigation is currently under way to establish what has occurred (at the recycling centre). For PETA to try and make light of this investigation is foolish, unwise and wrong.′

When a doctor was summoned to the plant in Ballyfermot, it was discovered that the recovered limbs were male. For the sake of the victim′s family and loved ones, RÃ³iste has called on the group to ′stop trying to gain publicity out of a sickening situation′.

In a statement, PETA has commented: ′While people are understandably horrified by the idea of finding dismembered human remains, PETA is hoping that some good might come from pointing out that murder – no matter the victim – is wrong.′ 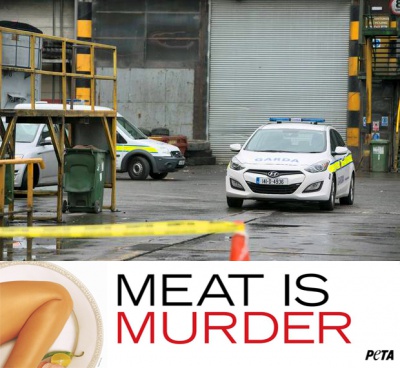