United States – ‘I didn’t know solid waste management was so controversial,’ retorted Hillary Clinton after a shoe was thrown at her from the audience during her keynote speech to the US Institute of Scrap Recycling Industries (ISRI) Convention held last week in Las Vegas.

The incident happened moments after the former first lady and secretary of state took to the stage in the Mandalay Bay Resort. Clinton ducked and was not struck by the shoe. Many in the audience of more than 1000 people applauded as she resumed her speech with the question: ‘Is this part of the Cirque du Soleil?’

Following her speech, Clinton answered questions posed by ISRI’s outgoing chair Jerry Simms who offered a ‘deepest apology for that crude interruption’. The woman who threw the shoe has been arrested but the reasons behind her actions remain unclear.

According to ISRI spokesman Mark Carpenter, she was not part of the Convention and should not have been in the room. The incident has grabbed headlines around the globe over the past weekend, drawing comparisons with the time in 2008 when president George W. Bush dodged shoes thrown at him by an Iraqi journalist. 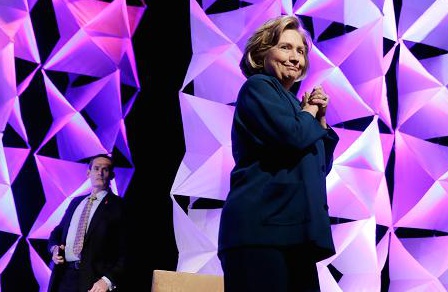 ‘Thank goodness she didn’t play softball like I did,’ Clinton commented after the incident.