Instead of completing a risky sea voyage, many prefer braving the cold and cycling from Russia over the border into Norway. Having flown to Murmansk on a Russian visa, the refugees head to the mining town of Nikel and buy second-hand bikes to negotiate the 50 km Norwegian border pass crossing north of the Arctic Circle.

Cycling is virtually the only option because it is not permitted to cross the border on foot, explains a Norwegian police spokesman. But because the bikes lack basic features such as brakes and lights, they cannot be used in Scandinavia and so are abandoned.

The bicycles are being thrown into containers and are subsequently picked up by waste collection services, says Arve Ãverland, director of waste management specialist Ãst-Finnmark Avfallsselskap. ‘We have about 40 tonnes of metal from the bikes in our yard right now,’ he states. The frames are being transported to nearby recycling centres for processing.

‘These bikes have helped to make a difference. To throw away good merchandise is an environmental crime,’ comments Vitalij Servetnik of the ecological centre on Russia’s Kola Peninsula. He says there are concrete plans to divert some of the ‘relatively new’ bikes to youth clubs and sports teams.

Rune Rafaelsen, mayor of the nearby municipality of Soer-Varanger, has urged that temperatures will soon drop. ‘I do not dare to think that this situation will continue throughout the winter,’ he cautions. 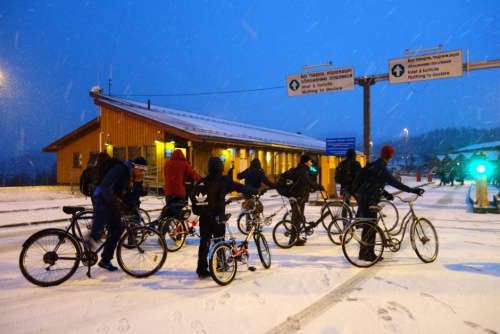 Refugees are buying what could be called ‘freedom bikes’ to make it to safety in Norway, despite the snow.