United Kingdom – Consumer goods account for about 60% of total consumer spending, 35% of material inputs in the economy and 75% of waste. Only 20% of them are effectively recycled, says environmental entrepreneur Ellen MacArthur. 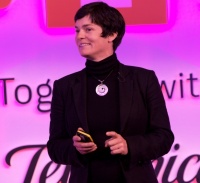 Speaking at the Wired 2013 symposium in London, MacArthur stressed that consumers could save up to £432 billion (US$ 700 billion) globally through a more circular economy. This is the ultimate aim of the Ellen MacArthur Foundation, launched by the record-holding British sailor in 2010.

‘Our business models are linked to a conveyor belt system; we do recycle some of the material, but not by design. Instead we try to get out what we can and make do,’ noted MacArthur. By ‘eradicating’ waste through careful consideration of how to manufacture each product, she said an industrial economy could be achieved that was ‘restorative’ rather than a ‘semi-effective afterthought’ that did no more than postpone Earth’s dwindling pool of resources.

‘When you’re racing through the ocean 2500 miles away from the nearest town, you’re completely alone. If you break a leg or require any sort of medical attention, it will take five days for someone to get you and five days for you to get out,’ MacArthur told the audience. ‘No experience in my life could have connected me any more to the notion of what finite really means.’

During one of her recent trips to meet manufacturers and recyclers, she visited a coal factory, where she learned that the world’s reserves of coal would be entirely depleted in 118 years. ‘That’s miles more than oil, and well outside my lifetime – perhaps there’s still time to correct things,’ she said. But the clock was running.

Some 50 businesses are currently in partnership with the Ellen MacArthur Foundation, including Renault, Philips, Cisco and Kingfisher. Welcoming one of the car maker’s initiatives especially, MacArthur commented: ‘Renault takes broken engines, gearboxes and fuel pumps and re-manufactures them. This not only costs the consumer less, but also makes Renault significantly more money.’