Scotland – It could soon be possible for households across Scotland to recycle disposable nappies and other hygiene products after local trials proved to be a ‘big success’, says recycling company Knowaste. ‘On average, between 72% and 82% of households who opted-in to a collection service went on to use it.’ 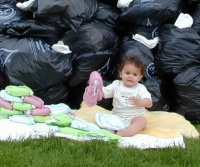 The trials, organised by nationwide recycling programme Zero Waste Scotland, were conducted last year in the council areas of Fife, North Lanarkshire, Perth & Kinross and Stirling. If collections were to become more widespread, it would create an ‘economic case’ to build a specialist nappy recycling factory in Scotland, according to the organisation.

Scotland’s environment secretary Richard Lochhead comments: ‘Disposable nappies have a huge impact on the environment with a staggering 450 000 ending up in landfill each day in Scotland.’ The nappy recycling trial has been ‘well received’ by parents and serves to encourage all local authorities to ‘explore the opportunities further’, he notes.

Knowaste has processed over 77 million nappies since opening its West Bromwich recycling facility in central England two years ago. The company says this is ‘just the start’ and is aiming to process some 56.4 million nappies in 2013/14 and 112.3 million nappies in 2014/15. The process yields cellulose fibre and plastic used in anything from roof shingles and railway sleepers to benches and flood defence systems.

‘Successful trials have also been completed at a paper mill to manufacture cardboard, which will be used to make toilet role tubes and moulded fibre packaging for non-food products,’ the recycler points out. Other possible applications could include bricks, insulation, brake linings, tarmac, pet litter, concrete and tile adhesive.