Italy – While radioactivity in scrap constitutes ‘a major issue’, many processors are resistant to taking protective steps, according to Robert Sau, an engineer at Milan-based Technology Nuclear Electronics.

Speaking to Recycling International at last week′s Metalriciclo show in the fellow Italian city of Verona, he insisted: ′People treating scrap need to take measures against radioactivity. But while the need is definitely there – in theory – recyclers are very stubborn.′ It is worrying, he said, that many companies appear to shrug off previous contamination incidents with the attitude ′That will not happen to me′.

According to Sau, they are not prepared for when something goes wrong – ′and it can, for any recycler on any given day′. Other recyclers are fully aware of the threat posed by radioactivity but don’t want to invest large sums of money on detection.

′Our mobile detector is the most-sold detection device in our portfolio – probably because, at around Euro 5000, it is much cheaper than the truck detection portals we offer,′ Sau argued. But the danger with such a mindset, he warned, is that refuge is sought in cheaper technology rather than in investing in the future.

Also at Metalriciclo, mPulse′ sales manager in Italy at Gusella Equipment, Fabio D′Amati, declared: ′We have to make the most of the current economy.′ He was at the Verona event to promote the latest mPulse handheld scrap analyser – a device with 10 patents that can identify metal alloys in a single second.

′There is a lower volume of scrap available right now so it matters more than ever to get the highest value for what you have,′ he said. The recycling market in Italy is still ′stuck at the same level′, according to D′Amati. ′I′d say that Italy is running behind Spain, which seems to be doing much better already. Our country is like an old Fiat – we are trying to restart the motor.′ 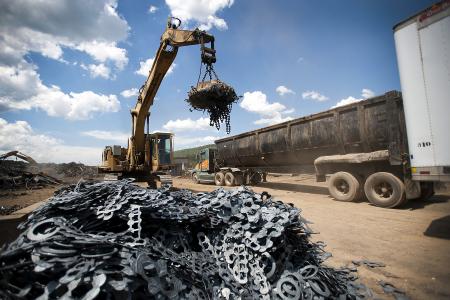