Germany – For over 20 years, Germany’s controversial Green Dot programme produced something of a Golden Age for private recycling companies. But a new era is dawning now that local utility companies are demanding they relinquish their exclusive rights, ‘Deutsche Welle’ has reported. 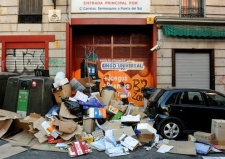 The Green Dot recycling programme was launched in 1991 by Germany’s then environment minister Klaus TÃ¶pfer under the Dual System Germany (DSD) banner. Producers and suppliers in 26 European countries began taking back used packaging – but not without the sparking of an intense debate about cost and efficiency.

Now, the Association of Local Utilities (VKU) says constituents should at last ‘take waste management matters into their own hands’. With the introduction of the packaging regulation, ‘the DSD served a clearing-house function of accepting licence fees and issuing licences’, explains VKU representative Patrick Hasenkamp.

He notes that all parties must pay a licensing fee in order to print the Green Dot eco-label on their products. In short, the DSD ‘put its own financial interests first’ and duly made large profits. As a result, declares Hasenkamp, recycling quality has faltered while associated costs have increased.

VKU is recommending the creation of a central point of operation to eliminate waste management privatisation, with new rules implemented to target higher recycling quotas. In addition, waste disposal and separation should be ‘regulated differently’ because materials such as metal and paper are valuable.

Criticism of the system is unwarranted, counters DSD spokesperson Norbert VÃ¶ll. Not only have costs to taxpayers fallen steadily over the years, experience with French municipalities has shown that taking over waste management can be equally problematic. ‘In France, less packaging waste is collected, but the costs are just as high – sometimes higher than Germany – because there is no control of efficiency and effectiveness there,’ VÃ¶ll reasons. The same is likely to happen in Germany should the nation decide to ‘hand over’ recycling to municipalities, he adds.