United States – Josh Mills is committed to creating computer games that ‘entertain and enlighten players about real-world topics’. Next up is ‘Scrap Squad’ – a fully recycling-focused game.

While sustainability has been winning terrain of late, a game about recycling might seem ′mundane and boring′ to consumers, Mills reckons. But the founder of Relevant Games has just the super-villain in mind to grab people′s attention. ′An evil genius that wants to take over the world – and the only thing he knows how to do is recycle,′ he explains.

The in-game "baddie" lives on an old landfill and recycles aluminium cans, PET bottles and other discards to get enough cash to fund his ′sinister plan′. Sorting is a key aspect of the gameplay: as various items move rapidly along a conveyor belt, it is up to the player to separate the waste and claim as many coins as possible. The incoming refuse gradually picks up speed, encouraging players to innovate the facility by upgrading the existing robots and laboratory.

The digital plant is based on real-life experience as Mills visited numerous sites across the US state of North Carolina in his preparation for launching the game.

Relevant Games partnered with Hazard Studios for ′Scrap Squad′, which will be available on iOS and Android as a free download. Initial feedback has been quite positive, with testers describing the game as ′past-paced′, ′challenging′ and a good ′time-killer′. 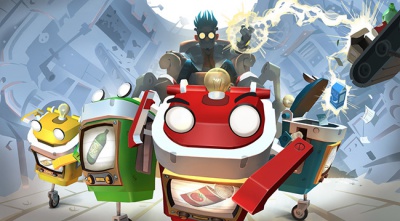