‘This year marks the 15th anniversary of our magazine – a good starting point for a new tradition,’ Manfred Beck, ”Recycling International” editor, announced at the BIR Spring Convention in Shanghai on Monday. ‘When thinking of who should get the first Award, it took us not even one second to decide,’ Beck said.

‘In our opinion, there was one person in the world who deserves this award more than anyone else: a man who started his work for the industry back in 1975 and who, rather than becoming a diplomat – his first choice – decided to become the figurehead of the global recycling industry by joining BIR.’

Beck added: ‘Let’s be honest, during the past 38 years, Francis has needed all his diplomatic skills to steer the organisation through many difficult times, while, at the same time having to deal with many different presidents and boards.’ He noted that this had not exactly been an easy task, since ‘the egos in our industry sometimes tend to be bigger than those of politicians’.

Veys drew special praise for helping defend the interests of the recycling industry globally. BIR has grown its membership to more than 900 from 70 countries. ‘And these numbers are still growing, even in difficult economic times,’ Beck said.

Although Veys will step down from his post on 1 August, Beck underlined that ‘he will not be lost to BIR’ as he will continue to advise its board and will remain involved in organising BIR congresses.

A unique stainless steel statue, designed by a Dutch sculptor, commemorates the Recycling International Award, which is also accompanied by a certificate. 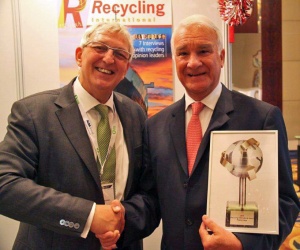 Veys commented that he was ‘very moved and grateful’ to receive the award, giving Beck, his long-time recycling

colleague, and the entire RI team his sincere thanks.