Asia – Out of a total of 1026 ships dismantled globally last year, 74% of the gross tonnage – or some 641 vessels – were sold to ‘sub-standard facilities’ in India, Pakistan and Bangladesh, according to the NGO Shipbreaking Platform. The organisation has released a list of what it describes as the ‘worst global dumpers’ whose ships are dismantled directly on tidal beaches and are therefore ‘polluting the Indian sub-continent’.

German ship owner Ernst Komrowski tops the list of ′dumpers′ with 14 end-of-life vessels sold to the beaching yards. All of these were formerly part of the Maersk fleet and had been on a long-term charter with the Danish container ship giant which, in contrast to Komrowski, follows a strict recycling policy for its own vessels.

′Ship owners sell their ships to the beaching yards for considerably greater profit than the price they could obtain by co-operating with modern ship recycling facilities.′ It is ′shameful′ for the shipping industry that so many owners choose to ′close their eyes′ to on-the-ground realities in South Asia, argues Heidegger. 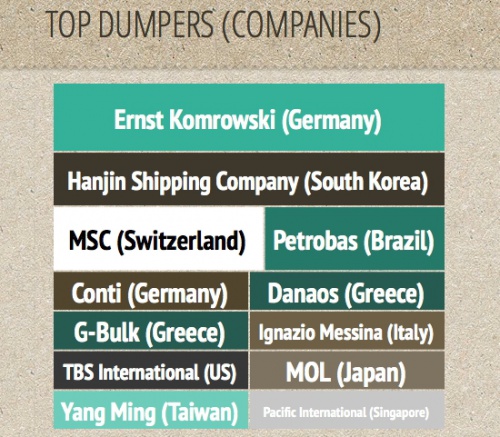