United States – ‘If something looks like trash, you are more likely to trash it – even if it has value such as recyclable items like aluminium cans or torn paper.’ So says a new study published in the ‘Journal of Consumer Research’. 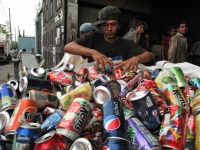 Researchers Remi Trudel and Jennifer Argo concluded that the public is often unable to recognise the potential value in some materials because they look dirty, useless or just not worth the trouble, and that this type of unconscious behaviour has dramatic consequences for recycling.

The research duo first stumbled upon this realisation when inspecting the waste stream of a university office building. They noticed a distinct pattern: large sheets of paper close to the standard US size of 8.5 x 11 inches were consigned to the recycling bin whereas nearly all the smaller pieces of paper were thrown into the refuse bin.

Trudel and Argo conducted a series of experiments which had students handle paper cut into various sizes: when they were asked to dispose of the paper on their way out, the large sheets were placed in the recycling bin 80% of the time – whereas 60% of the smaller fragments of paper were put in the refuse container. The same happened when the researchers carried out a test involving aluminium soda cans: participants recycled well over 80% of regular cans, only 40% of the smaller ones, and only 20% of those that were dented or otherwise damaged.

The researchers note: ‘More than 2 billion tons of trash gets tossed away every year around the globe. Figuring out how people think about what they’re going to discard should help the effort to squeeze more use out of less stuff.’ Consumer behaviour should be factored in when trying to find ways to boost current recycling rates, they add.