Asia – China has moved to stop the formation of the P3 global alliance involving the world’s three biggest shipping lines, the South China Morning Post has reported. This ‘surprise’ development ignores Western approval of the plan and has triggered an 8.7% plunge in the shares of shipping giant AP Moeller-Maersk.

China′s Ministry of Commerce is convinced that the proposed P3 vessel-pooling accord, which also includes Mediterranean Shipping Company (MSC) and CMA CGM, would ′restrict competition′ on the busiest Asia-Europe routes. It claims that, in ′numerous discussions′, the shipping companies had failed to show that the benefits would outweigh any adverse impact.

This rejection from China has resulted in the steepest intraday decline in Maersk′s shares since 2012. ′The decision does come as a surprise to us,′ acknowledges chief executive Nils Smedegaard Andersen. The Copenhagen-based company has announced that it will ′stop the preparatory work on the P3 Network′ and that it will no longer come into existence as initially planned.

′At Maersk Line, we have worked hard to address the Chinese questions and concerns, so of course it is a disappointment,′ adds Vincent Clerc, Maersk′s chief trade and marketing officer. ′P3 would have provided Maersk Line with a more efficient network and our customers with a better product. We are committed to continuing to be cost-competitive and offer reliable services.′

Together with MSC and CMA CGM, Maersk intended to commit 255 vessels, deployed on 29 trade loops, to a joint centre that would have run a combined fleet independently. 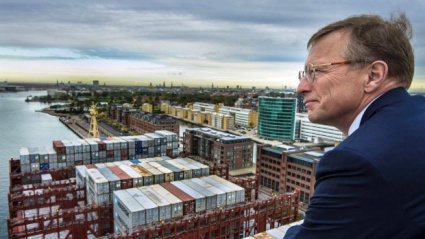 Nils Smedegaard Andersen: Not implementing the P3 Network will have ′no material impact′ on Maersk′s expected results for 2014.