India – ‘Do your best to make 18/3/2018 a very special day.’ With these words, BIR President Ranjit Singh Baxi addressed the World Council of Recycling Associations which had gathered at the latest BIR World Recycling Convention, held in New Delhi, India.

At the meeting, delegates witnessed the unveiling of a website – www.globalrecyclingday.com – dedicated to next year’s first-ever Global Recycling Day. With this launch and that of the Global Recycling Day’s social media channels Facebook, Twitter, Instagram and LinkedIn, Baxi said the countdown to next March’s special day had officially begun.

Baxi called on BIR members around the world to help make this initiative a huge success. ‘A lot of effort has been put in to this Global Recycling Day, but we now need your support to get this going,’ he said. ‘Recycling is still an untold story; we will have to put more focus on sharing this story with the outside world, the public.’

The website, which showcases the mission of Global Recycling Day organisers to refocus the world’s awareness of recycling, represents step one of the process. The next phase will be to build its content, according to Sophy Norris, Director of the UK-based PR agency Flagship which is responsible for developing the Global Recycling Day website and campaign. ‘I know there are many shredder videos out there; we would be very keen on getting these online,’ she encouraged the Delhi audience.

Among the elected leaders of national recycling associations in attendance, who all expressed their support of the Day, Salam Sharif, President of the Bureau of Middle East Recycling, added: ‘We as the green industry’s ambassadors have to take responsibility and spread our Global Recycling Day message and logo as much as we can.’ ‘We need to advertise as much as we can the benefits of recycling,’ stressed Emmanuel Katrakis, Secretary General of the European Recycling Industries’ Confederation.

‘Congratulations to BIR with the launch of this website,’ added Mark Lewon, Chair of the US Institute of Scrap Recycling Industries. ‘We will support the Global Recycling Day as much as we can.’

Also offering a message of support was Sanjay Mehta, President of the Metal Recycling Association of India. ‘Thank you Mr. Baxi and BIR for this initiative,’ he said. ‘We will be a partner on this project and do everything that is in our power to make this day a success in the years to come.’ 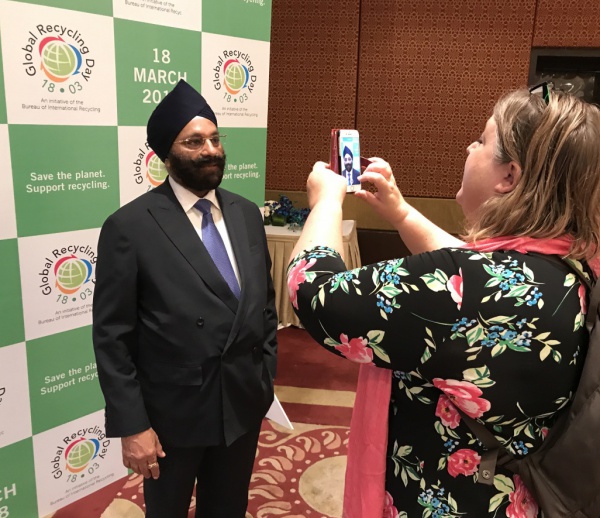