The Netherlands – Scientists at Eindhoven University of Technology in the Netherlands have created what they claim to be the world’s first circular car. ‘Noah’ will be TU/ecomotive’s fifth car and will feature new technologies addressing the future of the automotive industry.

Noah is a fully-electric city car and seats two people. Just like his big sister Lina, Noah’s chassis, body panels and interior are made from a biocomposite with flax as its main component.

The biocomposite used to make Lina is said to have been reinvented this year to be ‘more sustainable in both production as recyclability’. The matrix of polypropylene has been replaced by a matrix of PLA (sugar cane). ‘With this adaptation, the biocomposite will be produced with materials that are over 90% made from renewable resources,’ it is stressed.

‘The chassis will be constructed out of a sandwich panel combining the biocomposite with a honeycomb-structured core from sugar cane (PLA). Due to the fact that the entire sandwich panel only consists of two materials (PLA and flax), it is now fully recyclable.’

The circular economy was a key consideration during Noah’s design process through a focus on sustainable production, use and recyclability. With Noah weighing only 350 kg, he is a very efficient drive.

The complete drivetrain has been optimised and, using a system called Smesh Gear, the car will reach an efficiency of 97% during acceleration and even 100% at constant speeds.

The electromotors are powered by six modular batteries that enable easy battery swapping and the possibility of gradually introducing improved battery technologies when available.

To help make Noah future-ready, he is equipped with NFC scanners in his doors such that these can be opened by any mobile device. Noah will immediately recognise the user and set the car to his or her personal preferences, thus assisting with car-sharing Noah will be ready in June 2018 and then introduced to the public through trips to several major European cities. 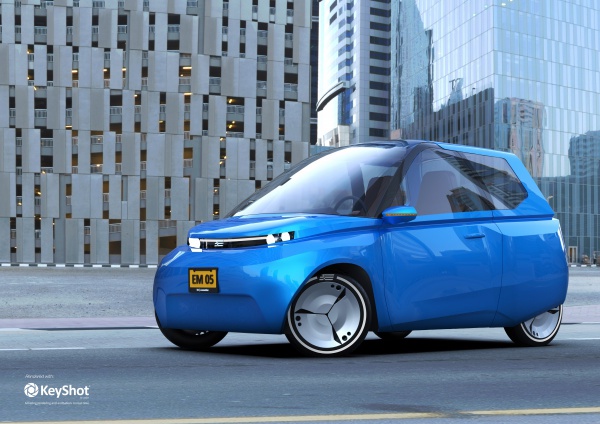 This is what the car would look like, according to the young engineers at TU Eindhoven.