The Netherlands – Walking down the street, it’s hard not to spot pieces of discarded chewing gum scattered all around. Unique Dutch venture GumBuddy is now collecting the hateful litter to create a line of products that people wouldn’t expect, namely flip-flops.

Some 5.5 million packets of chewing gum are sold in the Netherlands each year, a lot of which ends up on the floor or stuck to park furniture where it can remain for up to 25 years before degrading.

Cleaning up this sticky mess is an expensive business, costing approximately Euro 250 million per year in total or some Euro 15 per inhabitant, according to GumBuddy.

Describing used chewing gum as ‘a resource worthy of recycling’, the start-up has begun placing gum bins and ‘stick it here’ gum boards at local hotspots.

By adding the right polymers, all colours and flavours of collected gum can be recycled into rubber accessories, confirms research partner Fontys University. GumBuddy is also looking into creating a series of mobile phone cases from this unusual source material.

Plastics recycler BessTrade will be the ultimate processor of the gum; it is now storing the first consignments as an estimated 100 000 kg is required before the recycling initiative can kick into gear.

GumBuddy hopes its awareness campaign at high schools and at Dutch sports events will speed up the collection process. 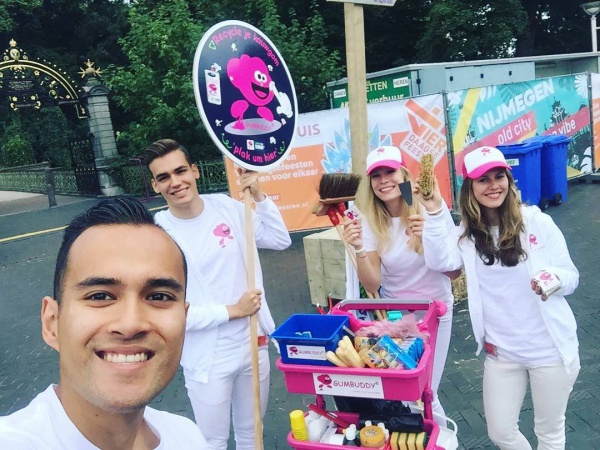