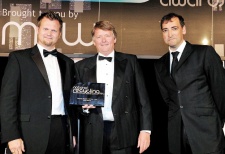 Jonathan Short, managing director of ECO Plastics, comments: ‘To win two awards in an evening is quite an achievement, but to do so at different ceremonies is a first for ECO Plastics.’ According to the judging panel at the National Recycling Awards, ‘ECO Plastics has rightly received national recognition for the scale and strength of its recycling operation and intelligently uses key partners to close the recycling circles’.

Meanwhile, the Business Green Leaders gong was awarded for Continuum’s contribution to domestic rPET production and the partnership’s notable impact on the local economy. The project was praised for providing a ‘real-life example’ of how closed-loop manufacturing can slash environmental impacts and greenhouse gas emissions.

In ‘a fantastic year’ for ECO Plastics, the Continuum joint venture with Coca-Cola Enterprises ‘has been a huge success’, Short adds. ‘The fact that it has been recognised with another top award demonstrates again that it is a project which genuinely has the potential to revolutionise the way that the recycling sector operates.’