United Kingdom – The word ‘surfboard’ doesn’t automatically make you think of cars. And yet leading car manufacturer Jaguar Land Rover has created a custom line of surfboards made entirely from waste plastics.

All polyurethane used in the creation of early studio car models is repurposed and turned into surfboards under Jaguar’s ‘Waste to Wave’ project.

‘The polymer forms the “skeleton” of the vehicle models, which is normally destroyed once a car is launched, while the clay is recycled and reused on site,’ Jaguar explains.

The new surfboard concept is part of the company’s wider ‘second life’ strategy and supports its longer-term zero-waste objective. Last year, Jaguar reworked and reused approximately 18.5 tonnes of recycled clay as part of the design process, which would have otherwise been discarded.

‘Excess clay is bagged up and given to local universities for students to reuse,’ it adds. Jaguar hopes its efforts will help drive ‘a new culture’ in which waste material is recognised as a high-value commodity.

The surfboard was created in partnership with SkunkWorks Surf Co. and tested off the coast of Northern Ireland by England’s number one female surfer Lucy Campbell. She confirmed riding the high-quality boards at Whiterocks Beach was ‘awesome’.

Watch how the surfboards are made here. 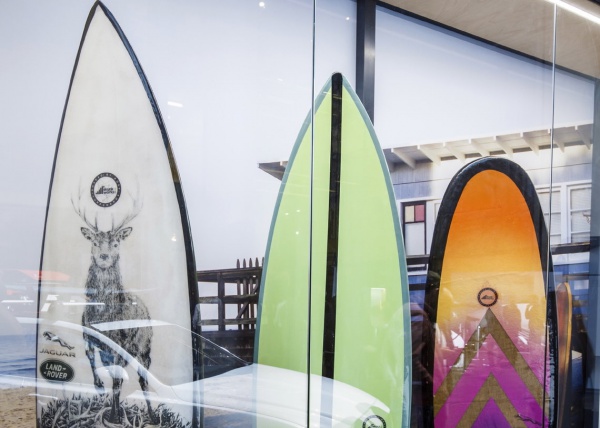