United Kingdom – A huge fire that broke out at Hanbury Plastic Recycling in Milton (UK) on 5 February was started deliberately, according to the local police force. Also, the site had been operating illegally, the Environment Agency has urged.

Over 50 fire fighters deployed with six fire engines from nearby towns were tackling the flames at the height of the incident. The roof soon collapsed so the fire had to be put out externally – which took several days. Hanbury Plastics Recycling was operating illegally as it never held an environmental permit and had thus been issued legal notices to clear the waste plastics from the site before the fire took place.

‘We instructed the company to remove the waste which went from a peak of around 10 000 tonnes, to about 1500 tonnes at the time of the fire,’ reports the UK Environment Agency.

Now the black fumes described by eyewitnesses as a ‘volcanic cloud’ have disappeared, the police has concluded that the fire was no accident at all. A further investigation is underway to find out exactly who was involved in the arson.

Hanbury Plastic Recycling was launched in 2011 and sorted seven streams of polymer, including film, HDPE, PET and polystyrene. 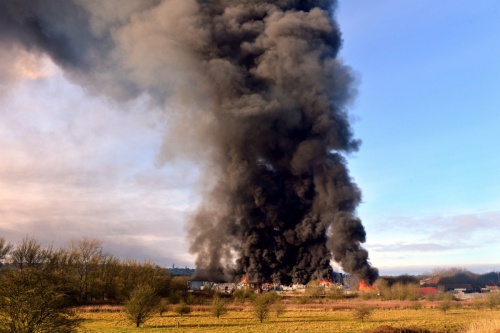