Poland – The demand for thermoplastics in Poland reached an estimated 2.7 million tonnes in 2016, driven mostly by a surge in consumer goods, domestic appliances and the automotive sector. The country’s solid economic growth trend not only means there is an increased use of virgin plastics ‘ down the line, a lot more plastic scrap will be collected for recycling.

Poland’s economical performance is ‘epitomised’ by polymer consumption, which surged more than 3.5% between 2009 and 2014, according to a new study by UK research firm Applied Market Information Ltd.

This is especially the case for high-density polyethylene, polyethylene terephthalate as well as polypropylene, the latter of which represents almost a quarter of all polymer demand.

Future growth for most consumer markets is said to be ‘good’. Researchers note that Poland’s plastics industry has the potential to surge 3% every single year until 2019, creating a market demand of 3 million tonnes. 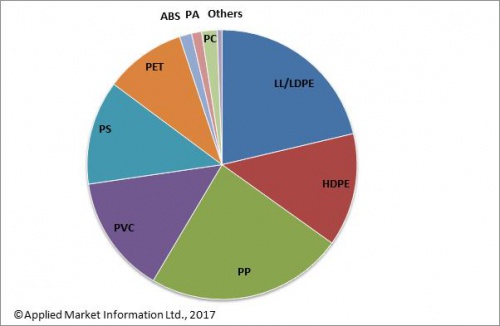