Global – ‘We can do it, we must do it and we will do it.’ So says Boyan Slat, founder and ceo of The Ocean Cleanup, the project which is aiming to rid the oceans of plastics. Speaking at a major event in the Netherlands, Slat announced that his team will start extracting plastic from the Great Pacific Garbage Patch ‘within the next 12 months’.

At the event attended by thousands of his supporters, Slat demonstrated a new technology and unveiled the first elements of the clean-up system: four, 12-metre-high anchor components. According to Slat, these enhancements could enable half of the Great Pacific Garbage Patch to be cleaned up ‘in ‘just five years’.

‘At The Ocean Cleanup, we are always looking for ways to make the clean-up faster, better and cheaper,’ Slat said. ‘Today is another important day in moving in that direction. The clean-up of the world’s oceans is just around the corner.’

The main idea behind The Ocean Cleanup is to let the ocean currents do the work as U-shaped screens channel floating plastic to a central point. This concentration of plastic can then be extracted and shipped to shore for recycling into new products.

The combination of this new, modular technology and of a recent multi-million-dollar funding round will enable The Ocean Cleanup to accelerate production, deployment and thus extraction of plastics from the ocean.

According to Slat, testing of the first system will start off the US west coast by the end of 2017. With the first deployment in the Great Pacific Garbage Patch slated for the first half of 2018, The Ocean Cleanup will start its mission two years ahead of schedule. 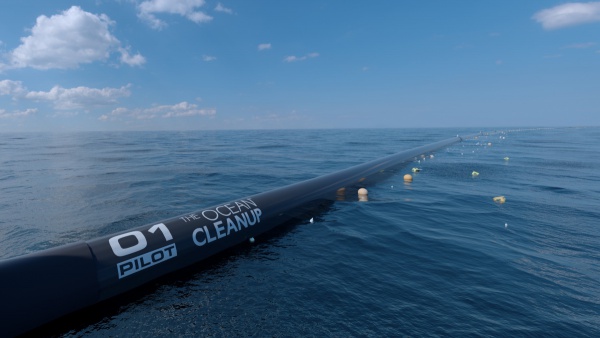