United Kingdom – A total of 120 392 tonnes of PVC was recycled in the UK last year, so reports Recovinyl. This represents not only a surge of 12% beyond the 2015 total of 107 593 tonnes but also a new recycling record for the country’s PVC industry.

Waste PVC-U profiles accounted for 62% of the UK’s recycling achievement in 2016; the equivalent of 5 million window profiles were recycled, said to be enough to renovate more than 420 000 average UK homes. Of the remaining PVC products recycled, these comprised mainly pipes, rigid and flexible films, and cables.

Upwards of 560 490 tonnes of waste PVC was recycled through Recovinyl last year across its 18 European member countries – again a milestone as this constituted a 10.4% increase over 2015. The UK volumes amounted to 21% of the total recycled across Europe, with Recovinyl being the main contributor. 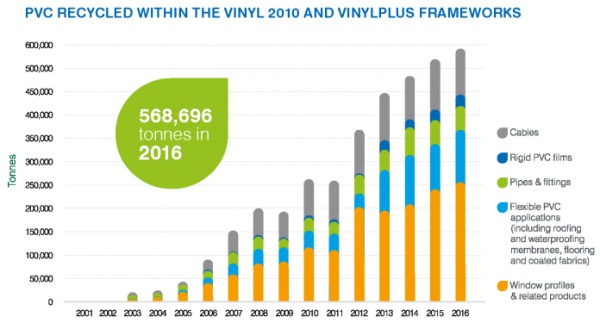