Global – The US Institute of Scrap Recycling Industries (ISRI) has filed comments with the World Trade Organization (WTO) in response to China’s plan to ban certain scrap imports – including certain types of plastic and mixed paper. ISRI requests the Chinese to revise their policy ‘to avoid a disrupt in trade’ as well as clarification of the ban’s scope.

‘ISRI fully supports the efforts of the Chinese government to improve environmental protection and standards within its domestic recycling infrastructure. However, we disagree that a ban on the import of specification’grade scrap materials will help with those efforts’ , stresses ISRI’s president Robin Wiener in a statement addressed to the WTO and China’s Ministry of Environmental Protection.

According to ISRI, a ban on imports of scrap commodities into China would be catastrophic to the recycling industry and could result in the loss of tens of thousands of jobs and the closure of many recycling businesses throughout the United States.

ISRI’s comments come one month after China notified the World Trade Organization of its plans to stop accepting imports of certain wastes by the end of 2017 as part of its National Sword campaign.

ISRI fears that a ban will have ‘a negative economic impact on the recycling industries in the United States and China, on the manufacturing sector in China that relies on these highly valuable commodities, and the environmental sustainability opportunities from the use of recyclable materials in China’.

Given that China is the largest scrap importer in the world, changes in Chinese import policies would have have major impact worldwide, not least the US, according to Robin Wiener. ‘China is the US recycling industry’s largest customer, accounting for 40% of exports,’ she argues.

ISRI estimates that ‘approximately 18%’ of the scrap trade between the US and China will be at risk and subject to the ban outlined under the 18 July 2017 notification, ‘or more than 2.9 million tonnes of specification’grade mixed paper and plastic scrap worth more than US$ 532 million annually’.

According to the industry body, requests to obtain confirmation from the Chinese government have been ‘unanswered’. ‘This lack of transparency on the part of the Chinese government has fueled increased speculation in the commodities markets and panic in the segment of the recycling industry specializing in the commodity streams of concern,’ it is stated.

ISRI points out that ‘there is a need to distinguish scrap from waste within the notification, as well as in the underlying regulations and related notices issued by the Chinese, in order to properly identify those materials for which the Chinese Government intends to truly impose a ban, while at the same time providing clarity for the exporting community as to what products are permissible for import’.

The questions and comments submitted to the WTO will form the basis of ISRI’s meetings with the Chinese government in the coming weeks. 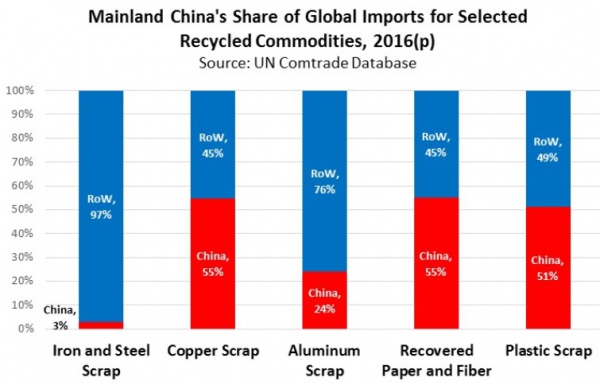