Greenland/China – Rare earth giant China is concerned that Greenland will become a major competitor in this field of activity, according to analysts. 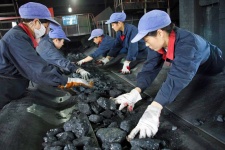 They argue that Chinese president Hu Jintao’s recent three-day visit to Denmark was inspired by a desire to forge closer links with the country. Greenland – a self-governing dependency of Denmark – has some of the world’s largest deposits of rare earth elements while China’s reserves are feeling the strain of over 50 years of ‘excessive mining’. China can no longer look forward to many years of ‘guaranteed’ rare earth supply, they say.

Data gathered by the European Commission suggests Greenland has ‘especially strong potential’ in six of the 14 elements on the EU’s critical raw materials list, including rare earths as well as niobium, tantalum and the platinum group metals. At present, Greenland’s rare earth resources amount to roughly 12 million tonnes – or 9% of the global total.

Analysts note that a number of the dependency’s significant deposits – for example, Kvanefjeld – are now in an advanced stage of exploration such that Greenland is likely to become a medium-size supplier in the future.

Meanwhile, London Mining – a firm backed by Chinese steelmakers – is seeking permission to construct a US$ 2.35 billion iron ore mine near Nuuk which, if sanctioned, would represent the biggest industrial development in Greenland.