Global – Thirsty soccer fans have pushed up sales of aluminium beverage cans. During the four weeks of football’s World Cup tournament, there was a 35% increase in sales when compared to the same period last year, reckons major aluminium recycler Novelis.

During a typical World Cup, consumption of beer alone can exceed normal levels by 20% in households where people are watching the games, according to studies conducted by Nielsen. Combined with record consumption of soft drinks and other beverages, Novelis estimates total can consumption has surpassed the two billion mark.

Tadeu Nardocci, president of Novelis South America, comments: ′The World Cup has caused an unusual uptick in our winter sales, adding the equivalent of a peak summer month′s sales and creating our highest winter sales season on record for beverage can sheet.′

A major supplier of aluminium can stock for the beverage market in South America, Novelis owns and operates Brazil′s largest aluminium recycling facility. In order to meet the growing demand for aluminium into the next decade, Novelis recently completed a US$ 340 million expansion of its aluminium rolling and recycling operations in Brazil, increasing its annual production capacity of aluminium can sheet from 400 000 to 600 000 tonnes.

Germany may have been crowned the top football team but, at 98%, Brazil is claimed to be world champion in terms of aluminium can recycling rates. 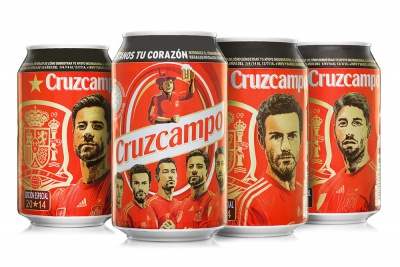