Germany – Copper producer Aurubis AG has inaugurated its KRS-Plus facilities which significantly expand the capacity of its Lünen recycling centre in Germany. The investment of Euro 62.5 million, of which Euro 17.5 million relates to environmental protection measures, has also led to the creation of 40 new jobs. 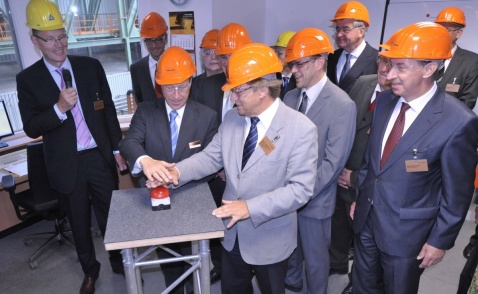 From left: Dr. Drouven and Harry K. Voigtsberger during start-up of the asset

KRS-Plus is an extension of the existing KRS facility, incorporating a top-blown rotary converter (TBRC), as well as a slag separator and a holding furnace. The investment programme was carried out over an 18-month period and will allow the throughput of the existing KRS cell smelter to be increased from 275 000 tonnes per annum to 350 000 tonnes.
Overall, the additional TBRC will expand Lünen’s recycling capacity by up to 100 000 tonnes per annum of utilised raw materials. The facility recycles numerous different items, including copper-bearing shredded material, residues from the copper processing industry, waste materials and also consumer scrap, including electrical and electronic scrap.
Authority and company officials took part in the symbolic pressing of the red button at the KRS-Plus launch event at the world’s largest copper recycling centre, including North Rhine-Westphalia’s Minister of Economics, top Aurubis executives and almost 300 guests. Among those present were: Ulrich Grillo, Vice-Chairman of the German industrial association BDI and President of WirtschaftsVereinigung Metalle (WVM); Michael Makiolla, the head of the administrative district of Unna; and Michael Haustein, First Deputy Mayor of Lünen.
Aurubis combines primary copper production and copper recycling but, in both areas, it can only have a future in Germany if it remains internationally competitive, explained the company’s Chairman Bernd Drouven. ‘On the one hand, this requires a secure supply of electrical power; on the other hand, internationally competitive electricity prices,’ he said. ‘As the price of copper is determined internationally on the London Metal Exchange, we cannot pass on additional local or regional costs to our customers.’