India – ‘Scrap is nothing to be ashamed of,’ declared Gemini Corporation founder Surendra Borad Patawari most passionately at the Metals Recycling Association of India’s (MRAI) annual conference in Jaipur last Friday. In his view, ‘making metals a free commodity’ would greatly improve the nation’s blossoming scrap market.

Besides advocating ‘free import’ of metal scrap, the entrepreneur also cited the fact that six brand-new shredder plants were recently built in the UK. ‘We don’t even have one. Actually, we would need dozens to handle all the material available to us, at least,’ Borad Patawari said.

He also pointed out that the UK has a designated person called a Resource Minister. ‘Can we please have someone like that? That would be a great step forward in pushing recycling higher up the agenda within the government,’ Borad Patawari agrued. Without a prominent recycling champion, it would be difficult to foster a long-term legacy passed down to incoming politicians.

This affinity with India’s recycling industry and the desire to help stimulate growth won the entrepreneur the first-ever International Indian Recycling Pioneer Award presented by MRAI. MRAI granted him this prestigious title because of the businessman being a ‘shining example’ for the entire country and particularly commended running a successful recycling business alongside doing sustainability-related charity work.

The prize was accompanied by a heartfelt applause from the crowd of over 1000 delegates. ‘I am so surprised by this honour,’ Borad Patawari told Recycling International with a smile from ear to ear. ‘I am glad to be here, as I am originally from the Rajasthan area, but I never expected this.’ Though he is admittedly not someone easily impressed by awards or driven by popular opinion, the entrepreneur concludes one thing: ‘I believe this shows that when you truly want to fight for something, they notice you, and people start to listen.’

He named no one other than Nine Dragons Paper businesswoman Cheung Yan as a ‘source of inspiration’ for anyone inside the scrap materials trade. ‘The waste paper queen, as they call her, was once just a young girl from a family of eight kids – what was so different about her was her ambition and determination,’ said Gemini’s founder. She worked as an accountant, but grew up go be the richest woman in all of China.

‘Her story ought to remind us what is possible in this life. We so often focus on exactly the opposite,’ Borad Patawari told the audience. ‘So let us plant the seed of hope that, like some have done before us, our children will be able to convert themselves into millionaires….or why not billionaires. Perhaps even by building a scrap empire.’

Gemini Corporation specialises in sourcing and distribution of recyclable plastics, metal and rubber. With a team of 200 people spread over 16 countries, it handles 1.2 million tons of materials every year. 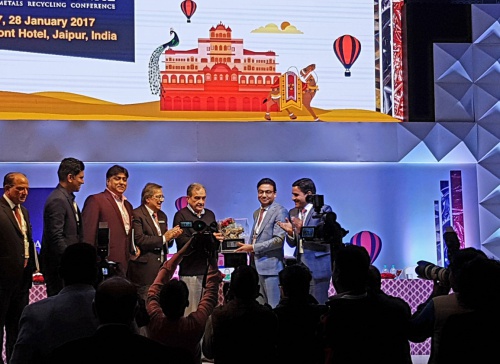 The upcoming issue (#2) of Recycling International will include a detailed report about the MRAI conference.