USA/UK – A father, his 18-year-old son and two other men have been arrested in connection with a series of copper thefts from Idaho Power substations in the USA. According to police, the culprits stole roughly US$ 15 000 worth of copper and have now been charged with theft, criminal conspiracy and grand theft. 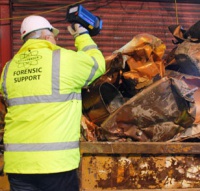 Police increased the frequency of their patrols in the affected areas after Idaho Power reported a surge in wire thefts. It is now ‘obvious’, police officials state, that the group had stolen copper wire from many other places and sold it to local recycling plants.

Meanwhile, another gang of four has entered a guilty plea to what has been dubbed an ‘industrial-scale copper theft operation’ recently uncovered in the UK by West Mercia Police’s Serious and Organised Crime Unit. The men made some £100 000 (US$ 166 000) mostly by targeting utility companies and the national rail service.