Canada – Canadian recycling firm Aerocycle has partnered with international tour operator Air Transat to scrap two of its Airbus A310 passenger jets. This is the first in a series of jobs which, it is hoped, will position Montreal as the ‘go-to destination’ for aircraft recycling. 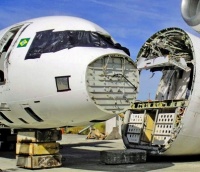 With the completion of this first dismantling project, Aerocycle is boasting ′outstanding′ scrapping results: it recovered 87% of the components from the two passenger jets, including around 83 tonnes of aluminium. This recovery rate was more than the 85% demanded by the sustainability standards of the Aircraft Fleet Recycling Association (AFRA), the company stresses.

Montreal is currently the world′s third biggest ′aerospace hub′ after Seattle and Toulouse, says Aerocycle′s president and ceo Ron Haber. ′Our objective is to make Montreal a centre of excellence for aircraft dismantling and recycling.′

The aim is to take ′a small percentage′ of the global market – a reference to the approximately 12 000 commercial aircraft that will have to be dismantled over the next two decades, according to AFRA estimates.

Noting that the partnership with Air Transat exceeded the voluntary industry standard, Haber emphasises that there is no mandated compliance in the industry. Therefore, establishing an environmental standard in North America is to be one of the core ambitions of the new recycling centre.