Download edition as PDF
Subscribe
MARKET ANALYSIS No real respite from falling prices US markets are hit hardest as global factors such as energy prices, inflation and lower demand bring tougher times for recyclers. 68 This report in the previous issue won- dered i...
Read the entire page 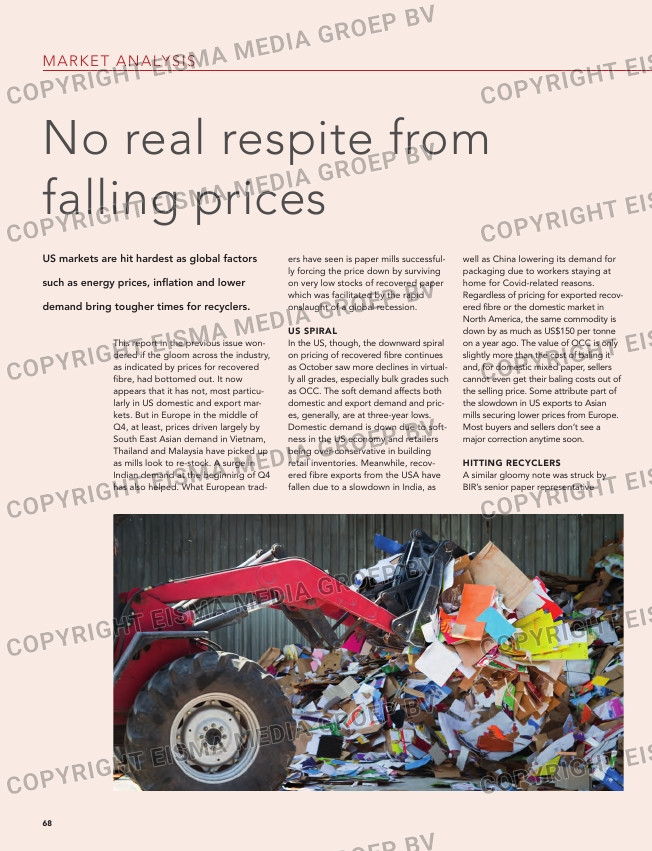 such as energy prices, inflation and lower

This report in the previous issue won-
dered if the gloom across the industry,
as indicated by prices for recovered
fibre, had bottomed out. It now
appears that it has not, most particu-
larly in US domestic and export mar-
kets. But in Europe in the middle of
Q4, at least, prices driven largely by
South East Asian demand in Vietnam,
Thailand and Malaysia have picked up
as mills look to re-stock. A surge in
Indian demand at the beginning of Q4
has also helped. What European trad-

ers have seen is paper mills successful-
ly forcing the price down by surviving
on very low stocks of recovered paper
which was facilitated by the rapid
onslaught of a global recession.

US SPIRAL
In the US, though, the downward spiral
on pricing of recovered fibre continues
as October saw more declines in virtual-
ly all grades, especially bulk grades such
as OCC. The soft demand affects both
domestic and export demand and pric-
es, generally, are at three-year lows.
Domestic demand is down due to soft-
ness in the US economy and retailers
being over-conservative in building
retail inventories. Meanwhile, recov-
ered fibre exports from the USA have
fallen due to a slowdown in India, as

well as China lowering its demand for
packaging due to workers staying at
home for Covid-related reasons.
Regardless of pricing for exported recov-
ered fibre or the domestic market in
North America, the same commodity is
down by as much as US$150 per tonne
on a year ago. The value of OCC is only
slightly more than the cost of baling it
and, for domestic mixed paper, sellers
cannot even get their baling costs out of
the selling price. Some attribute part of
the slowdown in US exports to Asian
mills securing lower prices from Europe.
Most buyers and sellers don’t see a
major correction anytime soon.

Francisco Donoso at the organisation’s
convention in Dubai in October. Noting
that mills worldwide were struggling
with the consequences of rocketing
energy prices, he said they could only
respond by cutting the prices they pay
for recovered paper, thereby hitting the
recyclers. Donoso said prices for OCC
in Europe had fallen by between 80%
and 90% in recent months, amid
extremely low demand all around the
world with high stocks at paper mills.
‘The high cost of energy – and specifi-
cally gas – is one of the reasons for this
as it has become by far the largest pro-
duction cost for mills. They cannot pass
on this cost in their sales prices
because demand for their products is
also low owing to the financial crisis,
and neither can they reduce their ener-
gy costs. Therefore, the only cost they
can manage is what they pay for their
raw material.’
In the USA, he added, prices for mixed
paper had reached zero dollars in
some locations and thousands of
tonnes were being landfilled.

LOOKING TO NEIGHBOURS
US merchants are thus left sitting on
significant stocks of material and reluc-
tant to sell until the price bounces
back. If there is any bright spot for US
exports, it is Mexico although growth
in recent months is so slight it hardly
moves the needle and does not come
close to making up the shortfall from
the decline in exports to India and
Southeast Asia.
Added to this, Chinese imports of
recovered paper pulp from their neigh-