Download edition as PDF
Subscribe
MARKET ANALYSIS General gloom deepens for recyclers A challenging playing field has been created by geopolitical tensions and macro-economic issues such as high energy costs and inflation. Shipping costs were less of a chal- lenge t...
Read the entire page 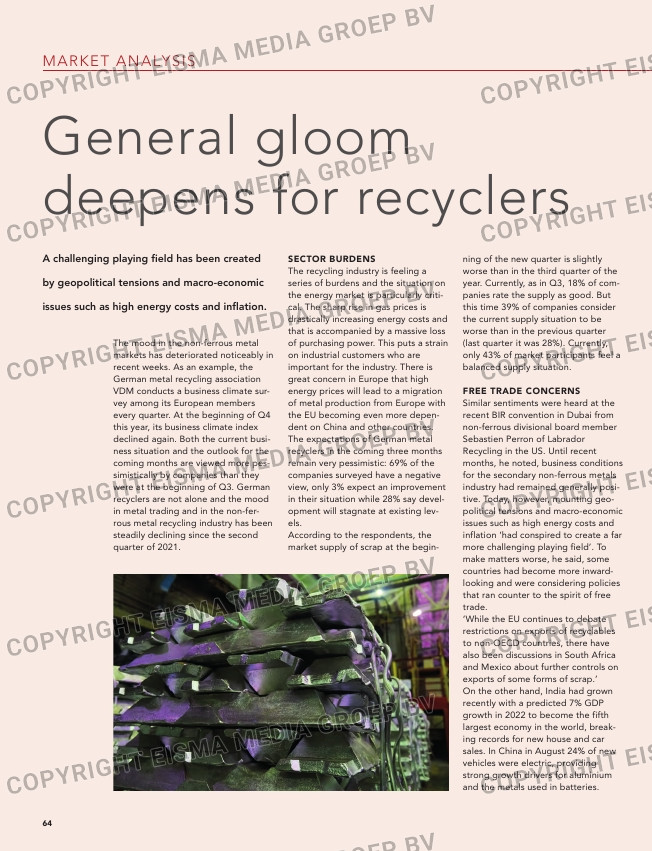 by geopolitical tensions and macro-economic

issues such as high energy costs and inflation.

Shipping costs were less of a chal-
lenge than they had been at the previ-
ous convention in Barcelona, Perron
added. He concluded: ‘Increased
energy costs are having a detrimental
effect in many parts of the world, par-
ticularly in greater Europe. Copper
appears to have a bullish case, where-
as aluminium demand is weaker.
Capital costs increased by higher rates
and inflation are clearly putting nega-
tive pressure on our industry.’

METAL DEMAND
The International Copper Study Group
(ICSG) published its latest forecast for
the metal after meeting in Lisbon in
mid-October. It expects world copper
mine production to increase by 3.9%
this year with higher growth of 5.3%
in 2023. ‘Mine reduction in 2022,
although continuing to increase, has
underperformed vis-à-vis ICSG’s April
2022 expectations,’ the group says,
attributing the lower figure to Covid-
19, operational and geotechnical
issues, strikes, water restrictions in
Chile, lower than expected head
grades and community activism in
Peru.
World refined copper production is
forecast to rise by about 2.8% in 2022
and 3.3% in 2023. ‘Both primary (from
concentrates) and secondary (from
scrap) refined output are expected to
present higher growth rates in 2023.’
ICSG expects a deficit of about 328
000 tonnes for 2022 mainly due to
high Chinese apparent usage and con-
strained growth in copper production.
A surplus of about 155 000 tonnes is
expected in 2023 due mainly to addi-
tional supply.
According to the latest forecast from
the International Lead and Zinc Study
Group (ILZSG), world demand for
refined zinc is expected to fall 1.9% to
13.79 million tonnes in 2022 and rise
1.5% to 13.99 million tonnes in 2023.
In China, demand is set to decrease
by 3.3% this year, primarily because of
decreased activity in most major zinc-
consuming sectors. In 2023, a partial
recovery of 1.2% is anticipated.
For lead, ILZSG says that, after rising
by 4.6% in 2021, global demand for
the refined metal should increase by

SECTOR BURDENS
The recycling industry is feeling a
series of burdens and the situation on
the energy market is particularly criti-
cal. The sharp rise in gas prices is
drastically increasing energy costs and
that is accompanied by a massive loss
of purchasing power. This puts a strain
on industrial customers who are
important for the industry. There is
great concern in Europe that high
energy prices will lead to a migration
of metal production from Europe with
the EU becoming even more depen-
dent on China and other countries.
The expectations of German metal
recyclers in the coming three months
remain very pessimistic: 69% of the
companies surveyed have a negative
view, only 3% expect an improvement
in their situation while 28% say devel-
opment will stagnate at existing lev-
els.
According to the respondents, the
market supply of scrap at the begin-

FREE TRADE CONCERNS
Similar sentiments were heard at the
recent BIR convention in Dubai from
non-ferrous divisional board member
Sebastien Perron of Labrador
Recycling in the US. Until recent
months, he noted, business conditions
for the secondary non-ferrous metals
industry had remained generally posi-
tive. Today, however, mounting geo-
political tensions and macro-economic
issues such as high energy costs and
inflation ‘had conspired to create a far
more challenging playing field’. To
make matters worse, he said, some
countries had become more inward-
looking and were considering policies
that ran counter to the spirit of free
trade.
‘While the EU continues to debate
restrictions on exports of recyclables
to non-OECD countries, there have
also been discussions in South Africa
and Mexico about further controls on
exports of some forms of scrap.’
On the other hand, India had grown
recently with a predicted 7% GDP
growth in 2022 to become the fifth
largest economy in the world, break-
ing records for new house and car
sales. In China in August 24% of new
vehicles were electric, providing
strong growth drivers for aluminium
and the metals used in batteries.

The mood in the non-ferrous metal
markets has deteriorated noticeably in
recent weeks. As an example, the
German metal recycling association
VDM conducts a business climate sur-
vey among its European members
every quarter. At the beginning of Q4
this year, its business climate index
declined again. Both the current busi-
ness situation and the outlook for the
coming months are viewed more pes-
simistically by companies than they
were at the beginning of Q3. German
recyclers are not alone and the mood
in metal trading and in the non-fer-
rous metal recycling industry has been
steadily declining since the second
quarter of 2021.