Download edition as PDF
Subscribe
MARKET ANALYSIS All change after healthy 2021 Steel production cuts, decline in Turkey, war in Ukraine and a switch to billet ‘has consequenc- es for global scrap sellers’. 58 prosect of improvement with HRC prices at their lowes...
Read the entire page 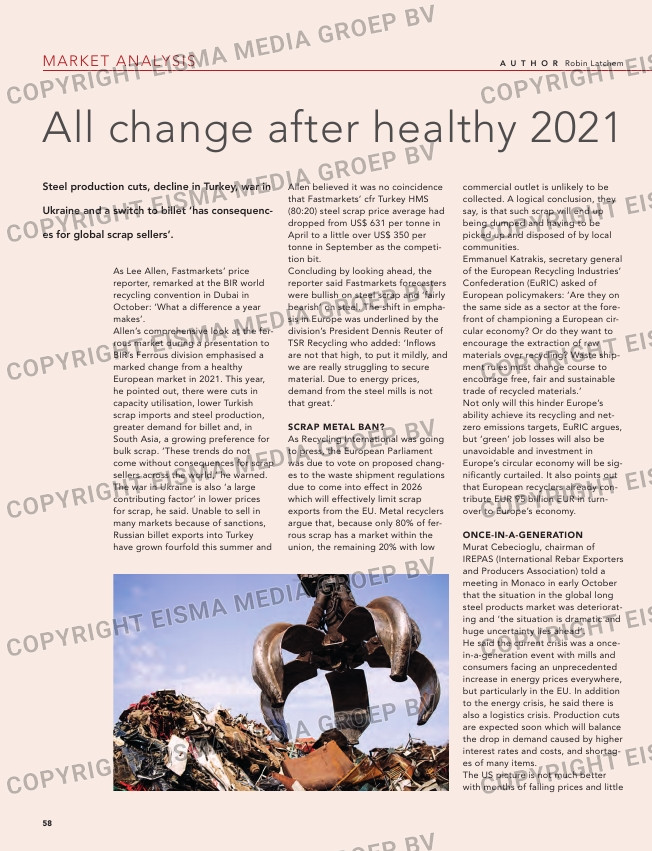 All change after healthy 2021
Steel production cuts, decline in Turkey, war in

Ukraine and a switch to billet ‘has consequenc-

prosect of improvement with HRC
prices at their lowest for a year.
Jens Björkman, who chairs IREPAS’s
raw material suppliers committee,
says US scrap demand has slowed
and producers are running at slightly
lower capacities, pressuring scrap
and iron ore prices. The supply of
new production scrap, which was pre-
viously in good shape, has been
slower. In China, Björkman notes,
demand for steel and raw materials
has been weakening, with the out-
look remaining negative despite a
significant stimulus.

LOW UTILISATION
Joost van Kleef, Europe, chairman of
BIR’s stainless steel and special alloys
committee, also believes the recession
is causing major concerns for stainless
steel producers. ‘This is a challenge
faced by most industries, to which we

commercial outlet is unlikely to be
collected. A logical conclusion, they
say, is that such scrap will end up
being dumped and having to be
picked up and disposed of by local
communities.
Emmanuel Katrakis, secretary general
of the European Recycling Industries’
Confederation (EuRIC) asked of
European policymakers: ‘Are they on
the same side as a sector at the fore-
front of championing a European cir-
cular economy? Or do they want to
encourage the extraction of raw
materials over recycling? Waste ship-
ment rules must change course to
encourage free, fair and sustainable
trade of recycled materials.’
Not only will this hinder Europe’s
ability achieve its recycling and net-
zero emissions targets, EuRIC argues,
but ‘green’ job losses will also be
unavoidable and investment in
Europe’s circular economy will be sig-
nificantly curtailed. It also points out
that European recyclers already con-
tribute EUR 95 billion EUR in turn-
over to Europe’s economy.

ONCE-IN-A-GENERATION
Murat Cebecioglu, chairman of
IREPAS (International Rebar Exporters
and Producers Association) told a
meeting in Monaco in early October
that the situation in the global long
steel products market was deteriorat-
ing and ‘the situation is dramatic and
huge uncertainty lies ahead’.
He said the current crisis was a once-
in-a-generation event with mills and
consumers facing an unprecedented
increase in energy prices everywhere,
but particularly in the EU. In addition
to the energy crisis, he said there is
also a logistics crisis. Production cuts
are expected soon which will balance
the drop in demand caused by higher
interest rates and costs, and shortag-
es of many items.
The US picture is not much better
with months of falling prices and little

As Lee Allen, Fastmarkets’ price
reporter, remarked at the BIR world
recycling convention in Dubai in
October: ‘What a difference a year
makes’.
Allen’s comprehensive look at the fer-
rous market during a presentation to
BIR’s Ferrous division emphasised a
marked change from a healthy
European market in 2021. This year,
he pointed out, there were cuts in
capacity utilisation, lower Turkish
scrap imports and steel production,
greater demand for billet and, in
South Asia, a growing preference for
bulk scrap. ‘These trends do not
come without consequences for scrap
sellers across the world,’ he warned.
The war in Ukraine is also ‘a large
contributing factor’ in lower prices
for scrap, he said. Unable to sell in
many markets because of sanctions,
Russian billet exports into Turkey
have grown fourfold this summer and

Allen believed it was no coincidence
that Fastmarkets’ cfr Turkey HMS
(80:20) steel scrap price average had
dropped from US$ 631 per tonne in
April to a little over US$ 350 per
tonne in September as the competi-
tion bit.
Concluding by looking ahead, the
reporter said Fastmarkets forecasters
were bullish on steel scrap and ‘fairly
bearish’ on steel. The shift in empha-
sis in Europe was underlined by the
division’s President Dennis Reuter of
TSR Recycling who added: ‘Inflows
are not that high, to put it mildly, and
we are really struggling to secure
material. Due to energy prices,
demand from the steel mills is not
that great.’

SCRAP METAL BAN?
As Recycling International was going
to press, the European Parliament
was due to vote on proposed chang-
es to the waste shipment regulations
due to come into effect in 2026
which will effectively limit scrap
exports from the EU. Metal recyclers
argue that, because only 80% of fer-
rous scrap has a market within the
union, the remaining 20% with low