Download edition as PDF
Subscribe
52 ENTREPRENEUR’S VISION OF A WORLD WITHOUT WASTE Indian start-up TrashCon has created a sorting system that can process up to 200 tonnes of waste per day. ‘Our TrashBot can run for 24 hours, non-stop,’ says company founder and ...
Read the entire page 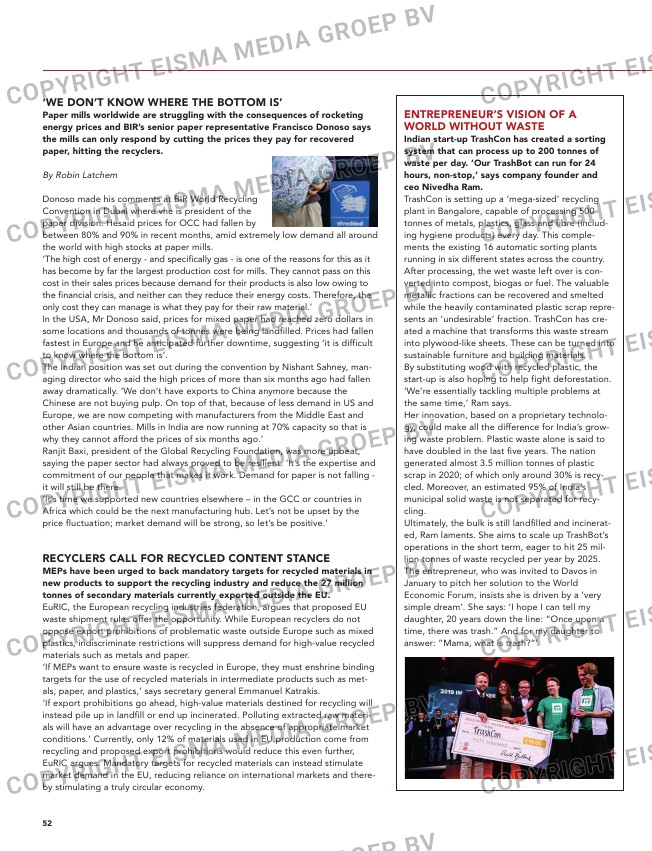 ENTREPRENEUR’S VISION OF A
WORLD WITHOUT WASTE
Indian start-up TrashCon has created a sorting
system that can process up to 200 tonnes of
waste per day. ‘Our TrashBot can run for 24
hours, non-stop,’ says company founder and
ceo Nivedha Ram.
TrashCon is setting up a ‘mega-sized’ recycling
plant in Bangalore, capable of processing 500
tonnes of metals, plastics, glass and fibre (includ-
ing hygiene products) every day. This comple-
ments the existing 16 automatic sorting plants
running in six different states across the country.
After processing, the wet waste left over is con-
verted into compost, biogas or fuel. The valuable
metallic fractions can be recovered and smelted
while the heavily contaminated plastic scrap repre-
sents an ‘undesirable’ fraction. TrashCon has cre-
ated a machine that transforms this waste stream
into plywood-like sheets. These can be turned into
sustainable furniture and building materials.
By substituting wood with recycled plastic, the
start-up is also hoping to help fight deforestation.
‘We’re essentially tackling multiple problems at
the same time,’ Ram says.
Her innovation, based on a proprietary technolo-
gy, could make all the difference for India’s grow-
ing waste problem. Plastic waste alone is said to
have doubled in the last five years. The nation
generated almost 3.5 million tonnes of plastic
scrap in 2020; of which only around 30% is recy-
cled. Moreover, an estimated 95% of India’s
municipal solid waste is not separated for recy-
cling.
Ultimately, the bulk is still landfilled and incinerat-
ed, Ram laments. She aims to scale up TrashBot’s
operations in the short term, eager to hit 25 mil-
lion tonnes of waste recycled per year by 2025.
The entrepreneur, who was invited to Davos in
January to pitch her solution to the World
Economic Forum, insists she is driven by a ‘very
simple dream’. She says: ‘I hope I can tell my
daughter, 20 years down the line: “Once upon a
time, there was trash.” And for my daughter to
answer: “Mama, what is trash?”’

‘WE DON’T KNOW WHERE THE BOTTOM IS’
Paper mills worldwide are struggling with the consequences of rocketing
energy prices and BIR’s senior paper representative Francisco Donoso says
the mills can only respond by cutting the prices they pay for recovered
paper, hitting the recyclers.

Donoso made his comments at BIR World Recycling
Convention in Dubai where vhe is president of the
paper division. Hesaid prices for OCC had fallen by
between 80% and 90% in recent months, amid extremely low demand all around
the world with high stocks at paper mills.
‘The high cost of energy – and specifically gas – is one of the reasons for this as it
has become by far the largest production cost for mills. They cannot pass on this
cost in their sales prices because demand for their products is also low owing to
the financial crisis, and neither can they reduce their energy costs. Therefore, the
only cost they can manage is what they pay for their raw material.’
In the USA, Mr Donoso said, prices for mixed paper had reached zero dollars in
some locations and thousands of tonnes were being landfilled. Prices had fallen
fastest in Europe and he anticipated further downtime, suggesting ‘it is difficult
to know where the bottom is’.
The Indian position was set out during the convention by Nishant Sahney, man-
aging director who said the high prices of more than six months ago had fallen
away dramatically. ‘We don’t have exports to China anymore because the
Chinese are not buying pulp. On top of that, because of less demand in US and
Europe, we are now competing with manufacturers from the Middle East and
other Asian countries. Mills in India are now running at 70% capacity so that is
why they cannot afford the prices of six months ago.’
Ranjit Baxi, president of the Global Recycling Foundation, was more upbeat,
saying the paper sector had always proved to be resilient. ‘It’s the expertise and
commitment of our people that makes it work. Demand for paper is not falling –
it will still be there.
‘It’s time we supported new countries elsewhere – in the GCC or countries in
Africa which could be the next manufacturing hub. Let’s not be upset by the
price fluctuation; market demand will be strong, so let’s be positive.’

RECYCLERS CALL FOR RECYCLED CONTENT STANCE
MEPs have been urged to back mandatory targets for recycled materials in
new products to support the recycling industry and reduce the 27 million
tonnes of secondary materials currently exported outside the EU.
EuRIC, the European recycling industries federation, argues that proposed EU
waste shipment rules offer the opportunity. While European recyclers do not
oppose export prohibitions of problematic waste outside Europe such as mixed
plastics, indiscriminate restrictions will suppress demand for high-value recycled
materials such as metals and paper.
‘If MEPs want to ensure waste is recycled in Europe, they must enshrine binding
targets for the use of recycled materials in intermediate products such as met-
als, paper, and plastics,’ says secretary general Emmanuel Katrakis.
‘If export prohibitions go ahead, high-value materials destined for recycling will
instead pile up in landfill or end up incinerated. Polluting extracted raw materi-
als will have an advantage over recycling in the absence of appropriate market
conditions.’ Currently, only 12% of materials used in EU production come from
recycling and proposed export prohibitions would reduce this even further,
EuRIC argues. Mandatory targets for recycled materials can instead stimulate
market demand in the EU, reducing reliance on international markets and there-
by stimulating a truly circular economy.

‘Plastics recycling represents an Researchers
working at the US$ 6 million (EUR 4.2 million)
department claim to have discovered a
closed-loop textile-to-textile recycling solu-
tion. This is based on a five-year R&D project
in which they were exploring next-generation,
eco-friendly and sustainable textiles.

The aim of the investment is to study the chemistry of various textiles and
determine the optimal processes and techniques required to achieve a cir-
cular textile economy. This work is in line with Singapore’s Zero Waste
vision and the Singapore Green Plan 2030.
The research centre, at Nanyang Technical University’s School of Materials
Science & Engineering, was officially launched by Grace Fu, Singapore’s
minister for sustainability and the environment, in August.
Royal Golden Eagle is one of the biggest producers of viscose, employing
more than 60 000 people across Indonesia, China, Brazil, Spain and
Canada. The partners will conduct experiments at a pilot textile recycling
plant in Singapore which is scheduled to begin operations by 2024. If suc-
cessful, the producer plans to build a network of recycling plants in other
cities.
‘Current textile recycling technologies, which rely primarily on a bleaching
and separation process using heavy chemicals, cannot be implemented
due to environmental laws,’ says company executive director Perry Lim.
‘At the same time, there is an urgent need to keep textiles out of the brim-
ming landfills.’
He adds: ‘We aim to catalyse closed-loop, textile-to-textile recycling by
developing optimal urban-fit solutions that can bring the world closer to a
circular textile economy.’