Download edition as PDF
Subscribe
CONFERENCE REPORT 37recyclinginternational.com | November/December | 2022 ‘Instead of starting from scratch, we’ve pooled our expertise and are using the latest technology,’ Cohen reports. This is based on Veolia’s prov- en...
Read the entire page 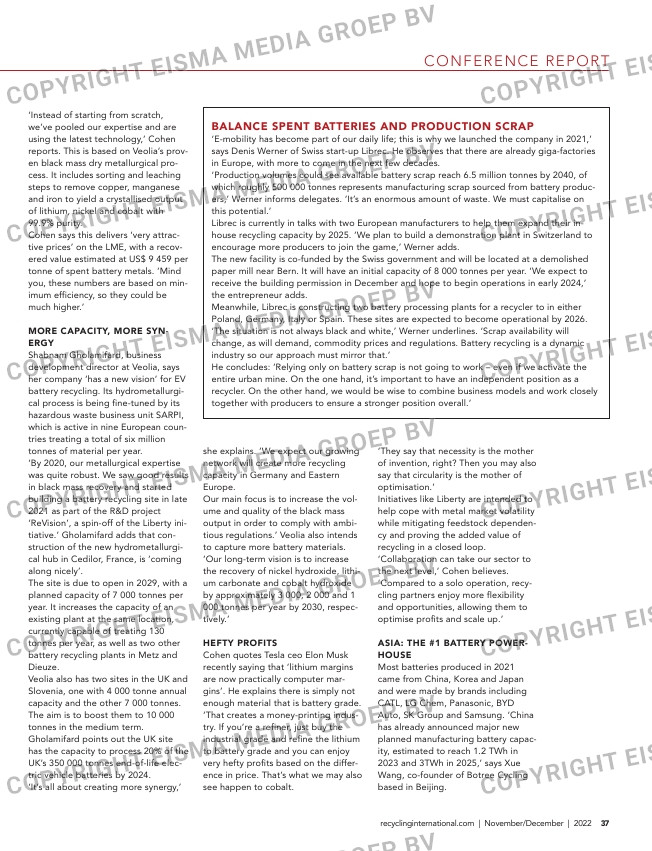 ‘Instead of starting from scratch,
we’ve pooled our expertise and are
using the latest technology,’ Cohen
reports. This is based on Veolia’s prov-
en black mass dry metallurgical pro-
cess. It includes sorting and leaching
steps to remove copper, manganese
and iron to yield a crystallised output
of lithium, nickel and cobalt with
99.9% purity.
Cohen says this delivers ‘very attrac-
tive prices’ on the LME, with a recov-
ered value estimated at US$ 9 459 per
tonne of spent battery metals. ‘Mind
you, these numbers are based on min-
imum efficiency, so they could be
much higher.’

MORE CAPACITY, MORE SYN-
ERGY
Shabnam Gholamifard, business
development director at Veolia, says
her company ‘has a new vision’ for EV
battery recycling. Its hydrometallurgi-
cal process is being fine-tuned by its
hazardous waste business unit SARPI,
which is active in nine European coun-
tries treating a total of six million
tonnes of material per year.
‘By 2020, our metallurgical expertise
was quite robust. We saw good results
in black mass recovery and started
building a battery recycling site in late
2021 as part of the R&D project
‘ReVision’, a spin-off of the Liberty ini-
tiative.’ Gholamifard adds that con-
struction of the new hydrometallurgi-
cal hub in Cedilor, France, is ‘coming
along nicely’.
The site is due to open in 2029, with a
planned capacity of 7 000 tonnes per
year. It increases the capacity of an
existing plant at the same location,
currently capable of treating 130
tonnes per year, as well as two other
battery recycling plants in Metz and
Dieuze.
Veolia also has two sites in the UK and
Slovenia, one with 4 000 tonne annual
capacity and the other 7 000 tonnes.
The aim is to boost them to 10 000
tonnes in the medium term.
Gholamifard points out the UK site
has the capacity to process 20% of the
UK’s 350 000 tonnes end-of-life elec-
tric vehicle batteries by 2024.
‘It’s all about creating more synergy,’

she explains. ‘We expect our growing
network will create more recycling
capacity in Germany and Eastern
Europe.
Our main focus is to increase the vol-
ume and quality of the black mass
output in order to comply with ambi-
tious regulations.’ Veolia also intends
to capture more battery materials.
‘Our long-term vision is to increase
the recovery of nickel hydroxide, lithi-
um carbonate and cobalt hydroxide
by approximately 3 000, 2 000 and 1
000 tonnes per year by 2030, respec-
tively.’

HEFTY PROFITS
Cohen quotes Tesla ceo Elon Musk
recently saying that ‘lithium margins
are now practically computer mar-
gins’. He explains there is simply not
enough material that is battery grade.
‘That creates a money-printing indus-
try. If you’re a refiner, just buy the
industrial grade and refine the lithium
to battery grade and you can enjoy
very hefty profits based on the differ-
ence in price. That’s what we may also
see happen to cobalt.

‘They say that necessity is the mother
of invention, right? Then you may also
say that circularity is the mother of
optimisation.’
Initiatives like Liberty are intended to
help cope with metal market volatility
while mitigating feedstock dependen-
cy and proving the added value of
recycling in a closed loop.
‘Collaboration can take our sector to
the next level,’ Cohen believes.
‘Compared to a solo operation, recy-
cling partners enjoy more flexibility
and opportunities, allowing them to
optimise profits and scale up.’

ASIA: THE #1 BATTERY POWER-
HOUSE
Most batteries produced in 2021
came from China, Korea and Japan
and were made by brands including
CATL, LG Chem, Panasonic, BYD
Auto, SK Group and Samsung. ‘China
has already announced major new
planned manufacturing battery capac-
ity, estimated to reach 1.2 TWh in
2023 and 3TWh in 2025,’ says Xue
Wang, co-founder of Botree Cycling
based in Beijing.

BALANCE SPENT BATTERIES AND PRODUCTION SCRAP
‘E-mobility has become part of our daily life; this is why we launched the company in 2021,’
says Denis Werner of Swiss start-up Librec. He observes that there are already giga-factories
in Europe, with more to come in the next few decades.
‘Production volumes could see available battery scrap reach 6.5 million tonnes by 2040, of
which roughly 500 000 tonnes represents manufacturing scrap sourced from battery produc-
ers,’ Werner informs delegates. ‘It’s an enormous amount of waste. We must capitalise on
this potential.’
Librec is currently in talks with two European manufacturers to help them expand their in-
house recycling capacity by 2025. ‘We plan to build a demonstration plant in Switzerland to
encourage more producers to join the game,’ Werner adds.
The new facility is co-funded by the Swiss government and will be located at a demolished
paper mill near Bern. It will have an initial capacity of 8 000 tonnes per year. ‘We expect to
receive the building permission in December and hope to begin operations in early 2024,’
the entrepreneur adds.
Meanwhile, Librec is constructing two battery processing plants for a recycler to in either
Poland, Germany, Italy or Spain. These sites are expected to become operational by 2026.
‘The situation is not always black and white,’ Werner underlines. ‘Scrap availability will
change, as will demand, commodity prices and regulations. Battery recycling is a dynamic
industry so our approach must mirror that.’
He concludes: ‘Relying only on battery scrap is not going to work – even if we activate the
entire urban mine. On the one hand, it’s important to have an independent position as a
recycler. On the other hand, we would be wise to combine business models and work closely
together with producers to ensure a stronger position overall.’