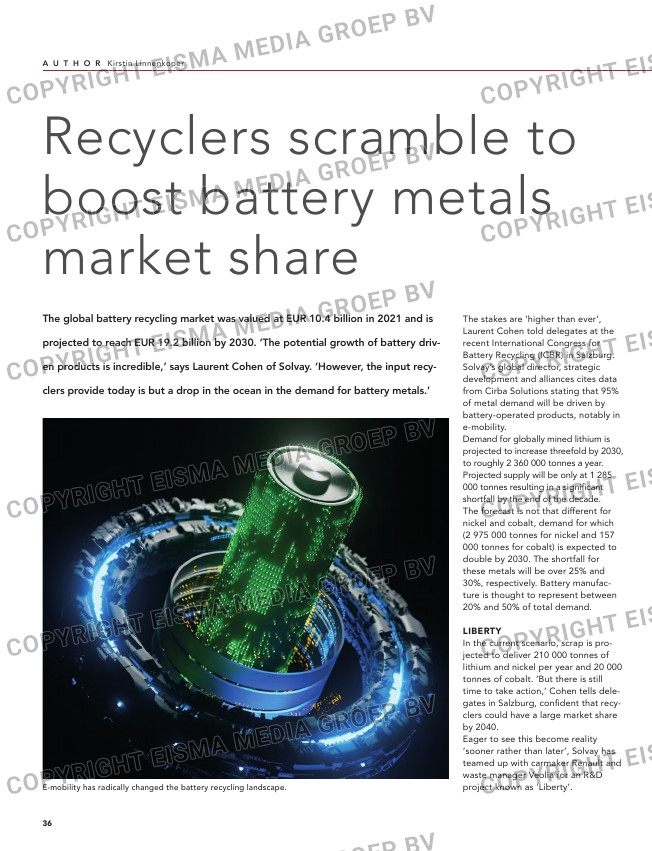 Recyclers scramble to
boost battery metals
market share
The global battery recycling market was valued at EUR 10.4 billion in 2021 and is

projected to reach EUR 19.2 billion by 2030. ‘The potential growth of battery driv-

en products is incredible,’ says Laurent Cohen of Solvay. ‘However, the input recy-

clers provide today is but a drop in the ocean in the demand for battery metals.’

‘Instead of starting from scratch,
we’ve pooled our expertise and are
using the latest technology,’ Cohen
reports. This is based on Veolia’s prov-
en black mass dry metallurgical pro-
cess. It includes sorting and leaching
steps to remove copper, manganese
and iron to yield a crystallised output
of lithium, nickel and cobalt with
99.9% purity.
Cohen says this delivers ‘very attrac-
tive prices’ on the LME, with a recov-
ered value estimated at US$ 9 459 per
tonne of spent battery metals. ‘Mind
you, these numbers are based on min-
imum efficiency, so they could be
much higher.’

MORE CAPACITY, MORE SYN-
ERGY
Shabnam Gholamifard, business
development director at Veolia, says
her company ‘has a new vision’ for EV
battery recycling. Its hydrometallurgi-
cal process is being fine-tuned by its
hazardous waste business unit SARPI,
which is active in nine European coun-
tries treating a total of six million
tonnes of material per year.
‘By 2020, our metallurgical expertise
was quite robust. We saw good results
in black mass recovery and started
building a battery recycling site in late
2021 as part of the R&D project
‘ReVision’, a spin-off of the Liberty ini-
tiative.’ Gholamifard adds that con-
struction of the new hydrometallurgi-
cal hub in Cedilor, France, is ‘coming
along nicely’.
The site is due to open in 2029, with a
planned capacity of 7 000 tonnes per
year. It increases the capacity of an
existing plant at the same location,
currently capable of treating 130
tonnes per year, as well as two other
battery recycling plants in Metz and
Dieuze.
Veolia also has two sites in the UK and
Slovenia, one with 4 000 tonne annual
capacity and the other 7 000 tonnes.
The aim is to boost them to 10 000
tonnes in the medium term.
Gholamifard points out the UK site
has the capacity to process 20% of the
UK’s 350 000 tonnes end-of-life elec-
tric vehicle batteries by 2024.
‘It’s all about creating more synergy,’

The stakes are ‘higher than ever’,
Laurent Cohen told delegates at the
recent International Congress for
Battery Recycling (ICBR) in Salzburg.
Solvay’s global director, strategic
development and alliances cites data
from Cirba Solutions stating that 95%
of metal demand will be driven by
battery-operated products, notably in
e-mobility.
Demand for globally mined lithium is
projected to increase threefold by 2030,
to roughly 2 360 000 tonnes a year.
Projected supply will be only at 1 285
000 tonnes resulting in a significant
shortfall by the end of the decade.
The forecast is not that different for
nickel and cobalt, demand for which
(2 975 000 tonnes for nickel and 157
000 tonnes for cobalt) is expected to
double by 2030. The shortfall for
these metals will be over 25% and
30%, respectively. Battery manufac-
ture is thought to represent between
20% and 50% of total demand.

LIBERTY
In the current scenario, scrap is pro-
jected to deliver 210 000 tonnes of
lithium and nickel per year and 20 000
tonnes of cobalt. ‘But there is still
time to take action,’ Cohen tells dele-
gates in Salzburg, confident that recy-
clers could have a large market share
by 2040.
Eager to see this become reality
‘sooner rather than later’, Solvay has
teamed up with carmaker Renault and
waste manager Veolia for an R&D
project known as ‘Liberty’.