Download edition as PDF
Subscribe
27recyclinginternational.com | November/December | 2022 CONFERENCE REPORT down significantly as the market grows and matures. That will be an extra incentive for producers currently on the fence to explore refurbished devices as a...
Read the entire page 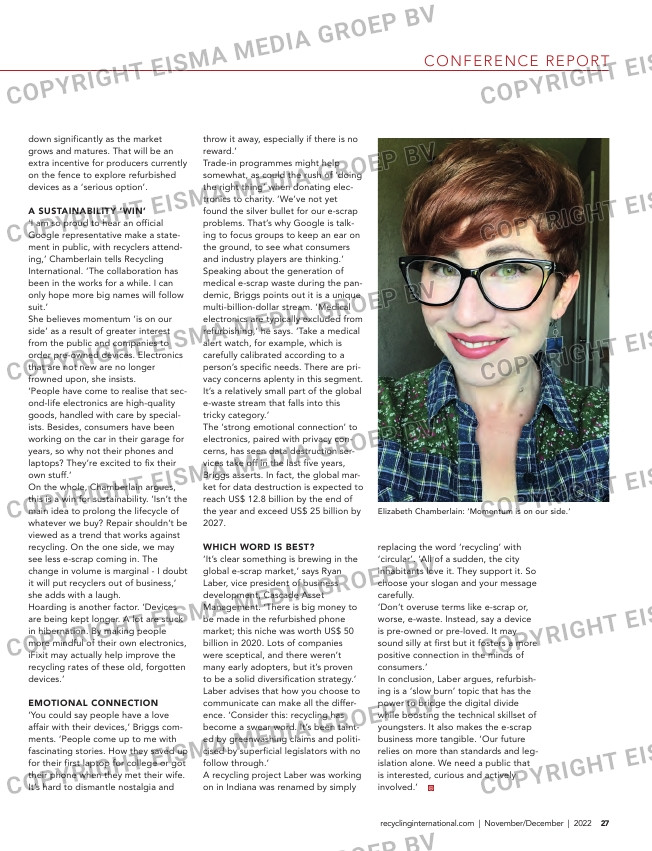 down significantly as the market
grows and matures. That will be an
extra incentive for producers currently
on the fence to explore refurbished
devices as a ‘serious option’.

A SUSTAINABILITY ‘WIN’
‘I am so proud to hear an official
Google representative make a state-
ment in public, with recyclers attend-
ing,’ Chamberlain tells Recycling
International. ‘The collaboration has
been in the works for a while. I can
only hope more big names will follow
suit.’
She believes momentum ‘is on our
side’ as a result of greater interest
from the public and companies to
order pre-owned devices. Electronics
that are not new are no longer
frowned upon, she insists.
‘People have come to realise that sec-
ond-life electronics are high-quality
goods, handled with care by special-
ists. Besides, consumers have been
working on the car in their garage for
years, so why not their phones and
laptops? They’re excited to fix their
own stuff.’
On the whole, Chamberlain argues,
this is a win for sustainability. ‘Isn’t the
main idea to prolong the lifecycle of
whatever we buy? Repair shouldn’t be
viewed as a trend that works against
recycling. On the one side, we may
see less e-scrap coming in. The
change in volume is marginal – I doubt
it will put recyclers out of business,’
she adds with a laugh.
Hoarding is another factor. ‘Devices
are being kept longer. A lot are stuck
in hibernation. By making people
more mindful of their own electronics,
iFixit may actually help improve the
recycling rates of these old, forgotten
devices.’

EMOTIONAL CONNECTION
‘You could say people have a love
affair with their devices,’ Briggs com-
ments. ‘People come up to me with
fascinating stories. How they saved up
for their first laptop for college or got
their phone when they met their wife.
It’s hard to dismantle nostalgia and

throw it away, especially if there is no
reward.’
Trade-in programmes might help
somewhat, as could the rush of ‘doing
the right thing’ when donating elec-
tronics to charity. ‘We’ve not yet
found the silver bullet for our e-scrap
problems. That’s why Google is talk-
ing to focus groups to keep an ear on
the ground, to see what consumers
and industry players are thinking.’
Speaking about the generation of
medical e-scrap waste during the pan-
demic, Briggs points out it is a unique
multi-billion-dollar stream. ‘Medical
electronics are typically excluded from
refurbishing,’ he says. ‘Take a medical
alert watch, for example, which is
carefully calibrated according to a
person’s specific needs. There are pri-
vacy concerns aplenty in this segment.
It’s a relatively small part of the global
e-waste stream that falls into this
tricky category.’
The ‘strong emotional connection’ to
electronics, paired with privacy con-
cerns, has seen data destruction ser-
vices take off in the last five years,
Briggs asserts. In fact, the global mar-
ket for data destruction is expected to
reach US$ 12.8 billion by the end of
the year and exceed US$ 25 billion by
2027.

WHICH WORD IS BEST?
‘It’s clear something is brewing in the
global e-scrap market,’ says Ryan
Laber, vice president of business
development, Cascade Asset
Management. ‘There is big money to
be made in the refurbished phone
market; this niche was worth US$ 50
billion in 2020. Lots of companies
were sceptical, and there weren’t
many early adopters, but it’s proven
to be a solid diversification strategy.’
Laber advises that how you choose to
communicate can make all the differ-
ence. ‘Consider this: recycling has
become a swear word. It’s been taint-
ed by greenwashing claims and politi-
cised by superficial legislators with no
follow through.’
A recycling project Laber was working
on in Indiana was renamed by simply

replacing the word ‘recycling’ with
‘circular’. ‘All of a sudden, the city
inhabitants love it. They support it. So
choose your slogan and your message
carefully.
‘Don’t overuse terms like e-scrap or,
worse, e-waste. Instead, say a device
is pre-owned or pre-loved. It may
sound silly at first but it fosters a more
positive connection in the minds of
consumers.’
In conclusion, Laber argues, refurbish-
ing is a ‘slow burn’ topic that has the
power to bridge the digital divide
while boosting the technical skillset of
youngsters. It also makes the e-scrap
business more tangible. ‘Our future
relies on more than standards and leg-
islation alone. We need a public that
is interested, curious and actively
involved.’

Elizabeth Chamberlain: ‘Momentum is on our side.’