Download edition as PDF
Subscribe
26 Pre-owned, pre-loved: putting a different spin on revived electronics ‘The world is heading towards more repair, reuse and refurbished devices; the trend has been going strong for years now and we’re very happy about that,’ sa...
Read the entire page 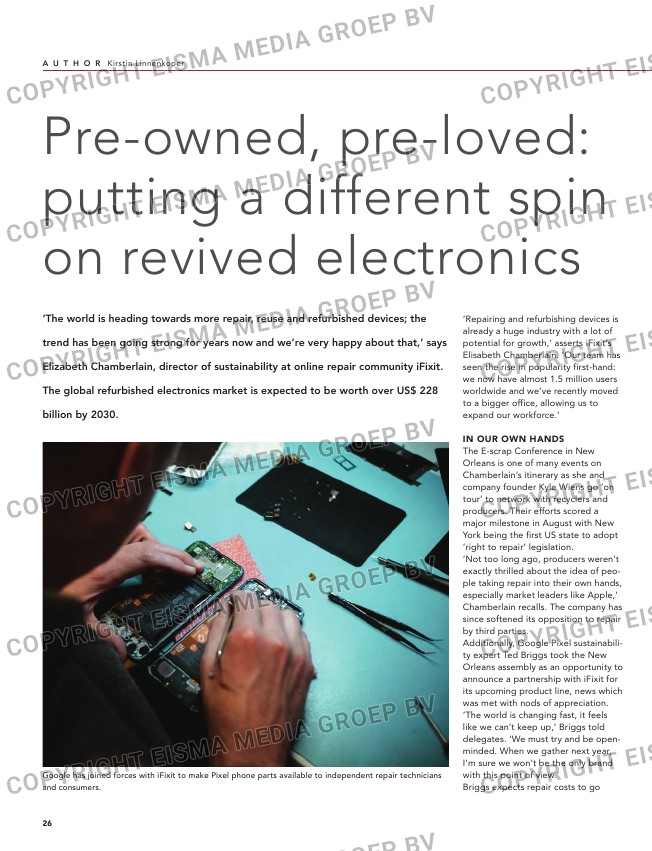 Pre-owned, pre-loved:
putting a different spin
on revived electronics
‘The world is heading towards more repair, reuse and refurbished devices; the

trend has been going strong for years now and we’re very happy about that,’ says

down significantly as the market
grows and matures. That will be an
extra incentive for producers currently
on the fence to explore refurbished
devices as a ‘serious option’.

A SUSTAINABILITY ‘WIN’
‘I am so proud to hear an official
Google representative make a state-
ment in public, with recyclers attend-
ing,’ Chamberlain tells Recycling
International. ‘The collaboration has
been in the works for a while. I can
only hope more big names will follow
suit.’
She believes momentum ‘is on our
side’ as a result of greater interest
from the public and companies to
order pre-owned devices. Electronics
that are not new are no longer
frowned upon, she insists.
‘People have come to realise that sec-
ond-life electronics are high-quality
goods, handled with care by special-
ists. Besides, consumers have been
working on the car in their garage for
years, so why not their phones and
laptops? They’re excited to fix their
own stuff.’
On the whole, Chamberlain argues,
this is a win for sustainability. ‘Isn’t the
main idea to prolong the lifecycle of
whatever we buy? Repair shouldn’t be
viewed as a trend that works against
recycling. On the one side, we may
see less e-scrap coming in. The
change in volume is marginal – I doubt
it will put recyclers out of business,’
she adds with a laugh.
Hoarding is another factor. ‘Devices
are being kept longer. A lot are stuck
in hibernation. By making people
more mindful of their own electronics,
iFixit may actually help improve the
recycling rates of these old, forgotten
devices.’

EMOTIONAL CONNECTION
‘You could say people have a love
affair with their devices,’ Briggs com-
ments. ‘People come up to me with
fascinating stories. How they saved up
for their first laptop for college or got
their phone when they met their wife.
It’s hard to dismantle nostalgia and

‘Repairing and refurbishing devices is
already a huge industry with a lot of
potential for growth,’ asserts iFixit’s
Elisabeth Chamberlain. ‘Our team has
seen the rise in popularity first-hand:
we now have almost 1.5 million users
worldwide and we’ve recently moved
to a bigger office, allowing us to
expand our workforce.’

IN OUR OWN HANDS
The E-scrap Conference in New
Orleans is one of many events on
Chamberlain’s itinerary as she and
company founder Kyle Wiens go ‘on
tour’ to network with recyclers and
producers. Their efforts scored a
major milestone in August with New
York being the first US state to adopt
‘right to repair’ legislation.
‘Not too long ago, producers weren’t
exactly thrilled about the idea of peo-
ple taking repair into their own hands,
especially market leaders like Apple,’
Chamberlain recalls. The company has
since softened its opposition to repair
by third parties.
Additionally, Google Pixel sustainabili-
ty expert Ted Briggs took the New
Orleans assembly as an opportunity to
announce a partnership with iFixit for
its upcoming product line, news which
was met with nods of appreciation.
‘The world is changing fast, it feels
like we can’t keep up,’ Briggs told
delegates. ‘We must try and be open-
minded. When we gather next year,
I’m sure we won’t be the only brand
with this point of view.’
Briggs expects repair costs to go