Download edition as PDF
Subscribe
24 Latin American e-cyclers united in ambition ‘We need to “tropicalise” electronics processing because when we talk about this waste stream, the western perspective is still on auto pilot,’ insists Jhoanna Rosales, founder o...
Read the entire page 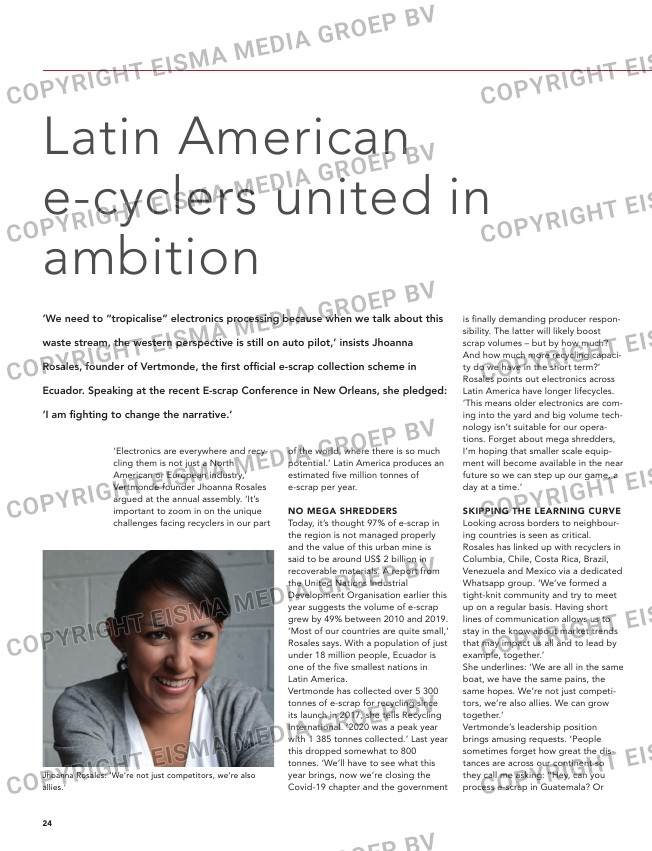 Ecuador. Speaking at the recent E-scrap Conference in New Orleans, she pledged:

‘I am fighting to change the narrative.’

Argentina? And what about Brazil?
That’s like ten countries away! I appre-
ciate the optimism, though,’ she adds
with a laugh.
As part of this joint approach,
Vertmonde and its partners are trans-
lating important guidance documents
for consumers and businesses into
multiple languages to bridge the gap
between Spanish, Portuguese, French
and English speakers across the conti-
nent. ‘Taking away unnecessary barri-
ers means we don’t have to start from
scratch,’ Rosales says.

LESS RED TAPE
The informal recycling consortium also
includes Jaime Estrada, general man-
ager of Orinoco E-scrap in Colombia.
The recycler saw its revenue increase
by over 50% in 2021. ‘There is a steep
learning curve for anyone working in
the e-scrap sector and we still have a
lot of catching up to do,’ he says.
‘Shared successes help us all move
forward.’
Estrada believes in the power of certi-
fications and compliance. ‘Our group
strives to establish a reputation as
trustworthy and credible recycling
partners. That’s why it’s crucial to have
all documents available in English as
well, so we can do business with lead-
ing foreign players. The world of
e-scrap is far and wide. Smaller, local
players have a lot to gain from

‘Electronics are everywhere and recy-
cling them is not just a North
American or European industry,’
Vertmonde founder Jhoanna Rosales
argued at the annual assembly. ‘It’s
important to zoom in on the unique
challenges facing recyclers in our part

of the world, where there is so much
potential.’ Latin America produces an
estimated five million tonnes of
e-scrap per year.

NO MEGA SHREDDERS
Today, it’s thought 97% of e-scrap in
the region is not managed properly
and the value of this urban mine is
said to be around US$ 2 billion in
recoverable materials. A report from
the United Nations Industrial
Development Organisation earlier this
year suggests the volume of e-scrap
grew by 49% between 2010 and 2019.
‘Most of our countries are quite small,’
Rosales says. With a population of just
under 18 million people, Ecuador is
one of the five smallest nations in
Latin America.
Vertmonde has collected over 5 300
tonnes of e-scrap for recycling since
its launch in 2017, she tells Recycling
International. ‘2020 was a peak year
with 1 385 tonnes collected.’ Last year
this dropped somewhat to 800
tonnes. ‘We’ll have to see what this
year brings, now we’re closing the
Covid-19 chapter and the government

is finally demanding producer respon-
sibility. The latter will likely boost
scrap volumes – but by how much?
And how much more recycling capaci-
ty do we have in the short term?’
Rosales points out electronics across
Latin America have longer lifecycles.
‘This means older electronics are com-
ing into the yard and big volume tech-
nology isn’t suitable for our opera-
tions. Forget about mega shredders,
I’m hoping that smaller scale equip-
ment will become available in the near
future so we can step up our game, a
day at a time.’

SKIPPING THE LEARNING CURVE
Looking across borders to neighbour-
ing countries is seen as critical.
Rosales has linked up with recyclers in
Columbia, Chile, Costa Rica, Brazil,
Venezuela and Mexico via a dedicated
Whatsapp group. ‘We’ve formed a
tight-knit community and try to meet
up on a regular basis. Having short
lines of communication allows us to
stay in the know about market trends
that may impact us all and to lead by
example, together.’
She underlines: ‘We are all in the same
boat, we have the same pains, the
same hopes. We’re not just competi-
tors, we’re also allies. We can grow
together.’
Vertmonde’s leadership position
brings amusing requests. ‘People
sometimes forget how great the dis-
tances are across our continent so
they call me asking: “Hey, can you
process e-scrap in Guatemala? Or