Download edition as PDF
Subscribe
19recyclinginternational.com | November/December | 2022 CONFERENCE REPORT Fadi Awadhalla (middle): ‘Primary producers are looking at recycling whether they like it or not.’ footsteps of Europe and the US and that’s a good ste...
Read the entire page 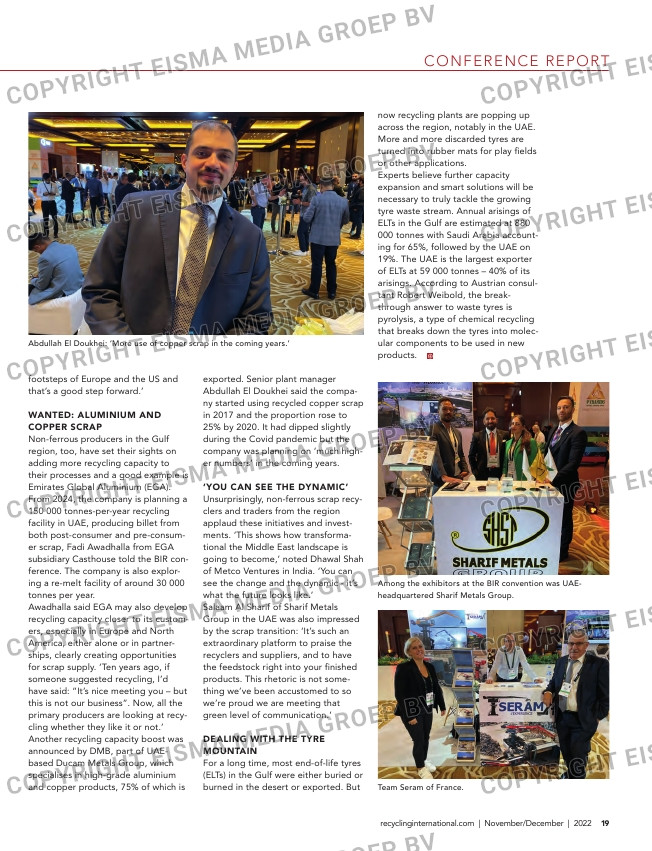 Fadi Awadhalla (middle): ‘Primary producers are looking at recycling whether they like it
or not.’

footsteps of Europe and the US and
that’s a good step forward.’

WANTED: ALUMINIUM AND
COPPER SCRAP
Non-ferrous producers in the Gulf
region, too, have set their sights on
adding more recycling capacity to
their processes and a good example is
Emirates Global Aluminium (EGA).
From 2024, the company is planning a
150 000 tonnes-per-year recycling
facility in UAE, producing billet from
both post-consumer and pre-consum-
er scrap, Fadi Awadhalla from EGA
subsidiary Casthouse told the BIR con-
ference. The company is also explor-
ing a re-melt facility of around 30 000
tonnes per year.
Awadhalla said EGA may also develop
recycling capacity closer to its custom-
ers, especially in Europe and North
America, either alone or in partner-
ships, clearly creating opportunities
for scrap supply. ‘Ten years ago, if
someone suggested recycling, I’d
have said: “It’s nice meeting you – but
this is not our business”. Now, all the
primary producers are looking at recy-
cling whether they like it or not.’
Another recycling capacity boost was
announced by DMB, part of UAE-
based Ducam Metals Group, which
specialises in high-grade aluminium
and copper products, 75% of which is

exported. Senior plant manager
Abdullah El Doukhei said the compa-
ny started using recycled copper scrap
in 2017 and the proportion rose to
25% by 2020. It had dipped slightly
during the Covid pandemic but the
company was planning on ‘much high-
er numbers’ in the coming years.

‘YOU CAN SEE THE DYNAMIC’
Unsurprisingly, non-ferrous scrap recy-
clers and traders from the region
applaud these initiatives and invest-
ments. ‘This shows how transforma-
tional the Middle East landscape is
going to become,’ noted Dhawal Shah
of Metco Ventures in India. ‘You can
see the change and the dynamic – it’s
what the future looks like.’
Salaam Al Sharif of Sharif Metals
Group in the UAE was also impressed
by the scrap transition: ‘It’s such an
extraordinary platform to praise the
recyclers and suppliers, and to have
the feedstock right into your finished
products. This rhetoric is not some-
thing we’ve been accustomed to so
we’re proud we are meeting that
green level of communication.’

DEALING WITH THE TYRE
MOUNTAIN
For a long time, most end-of-life tyres
(ELTs) in the Gulf were either buried or
burned in the desert or exported. But

now recycling plants are popping up
across the region, notably in the UAE.
More and more discarded tyres are
turned into rubber mats for play fields
or other applications.
Experts believe further capacity
expansion and smart solutions will be
necessary to truly tackle the growing
tyre waste stream. Annual arisings of
ELTs in the Gulf are estimated at 880
000 tonnes with Saudi Arabia account-
ing for 65%, followed by the UAE on
19%. The UAE is the largest exporter
of ELTs at 59 000 tonnes – 40% of its
arisings. According to Austrian consul-
tant Robert Weibold, the break-
through answer to waste tyres is
pyrolysis, a type of chemical recycling
that breaks down the tyres into molec-
ular components to be used in new
products.

Among the exhibitors at the BIR convention was UAE-
headquartered Sharif Metals Group.

Abdullah El Doukhei: ‘More use of copper scrap in the coming years.’