Download edition as PDF
Subscribe
18 Hamood Qaryan-Al Qahtani: ‘Eager to come in contact with tech supplier to come on board and help us.’ Fadi Awadhalla (middle): ‘Primary producers are looking at recycling whether they like it or not.’ A U T H O R / P H O T ...
Read the entire page 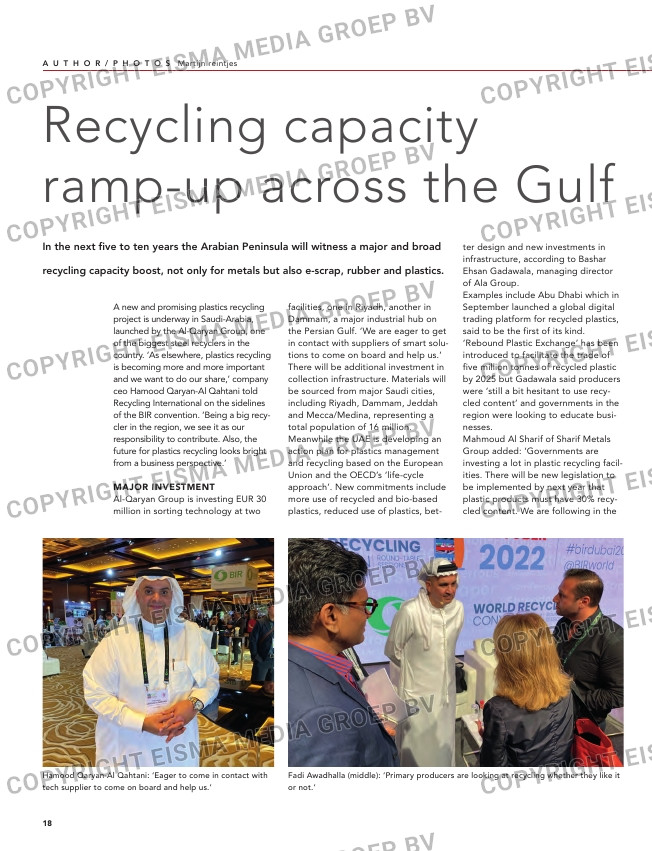 Hamood Qaryan-Al Qahtani: ‘Eager to come in contact with
tech supplier to come on board and help us.’

Fadi Awadhalla (middle): ‘Primary producers are looking at recycling whether they like it
or not.’

recycling capacity boost, not only for metals but also e-scrap, rubber and plastics.

footsteps of Europe and the US and
that’s a good step forward.’

WANTED: ALUMINIUM AND
COPPER SCRAP
Non-ferrous producers in the Gulf
region, too, have set their sights on
adding more recycling capacity to
their processes and a good example is
Emirates Global Aluminium (EGA).
From 2024, the company is planning a
150 000 tonnes-per-year recycling
facility in UAE, producing billet from
both post-consumer and pre-consum-
er scrap, Fadi Awadhalla from EGA
subsidiary Casthouse told the BIR con-
ference. The company is also explor-
ing a re-melt facility of around 30 000
tonnes per year.
Awadhalla said EGA may also develop
recycling capacity closer to its custom-
ers, especially in Europe and North
America, either alone or in partner-
ships, clearly creating opportunities
for scrap supply. ‘Ten years ago, if
someone suggested recycling, I’d
have said: “It’s nice meeting you – but
this is not our business”. Now, all the
primary producers are looking at recy-
cling whether they like it or not.’
Another recycling capacity boost was
announced by DMB, part of UAE-
based Ducam Metals Group, which
specialises in high-grade aluminium
and copper products, 75% of which is

A new and promising plastics recycling
project is underway in Saudi-Arabia,
launched by the Al-Qaryan Group, one
of the biggest steel recyclers in the
country. ‘As elsewhere, plastics recycling
is becoming more and more important
and we want to do our share,’ company
ceo Hamood Qaryan-Al Qahtani told
Recycling International on the sidelines
of the BIR convention. ‘Being a big recy-
cler in the region, we see it as our
responsibility to contribute. Also, the
future for plastics recycling looks bright
from a business perspective.’

facilities, one in Riyadh, another in
Dammam, a major industrial hub on
the Persian Gulf. ‘We are eager to get
in contact with suppliers of smart solu-
tions to come on board and help us.’
There will be additional investment in
collection infrastructure. Materials will
be sourced from major Saudi cities,
including Riyadh, Dammam, Jeddah
and Mecca/Medina, representing a
total population of 16 million.
Meanwhile the UAE is developing an
action plan for plastics management
and recycling based on the European
Union and the OECD’s ‘life-cycle
approach’. New commitments include
more use of recycled and bio-based
plastics, reduced use of plastics, bet-

ter design and new investments in
infrastructure, according to Bashar
Ehsan Gadawala, managing director
of Ala Group.
Examples include Abu Dhabi which in
September launched a global digital
trading platform for recycled plastics,
said to be the first of its kind.
‘Rebound Plastic Exchange’ has been
introduced to facilitate the trade of
five million tonnes of recycled plastic
by 2025 but Gadawala said producers
were ‘still a bit hesitant to use recy-
cled content’ and governments in the
region were looking to educate busi-
nesses.
Mahmoud Al Sharif of Sharif Metals
Group added: ‘Governments are
investing a lot in plastic recycling facil-
ities. There will be new legislation to
be implemented by next year that
plastic products must have 30% recy-
cled content. We are following in the

Abdullah El Doukhei: ‘More use of copper scrap in the coming years.’