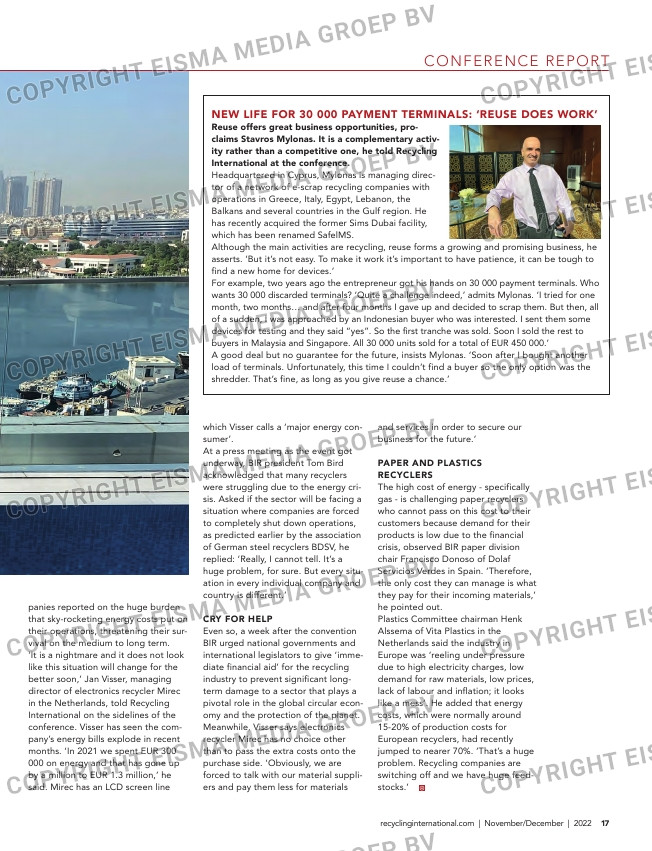 panies reported on the huge burden
that sky-rocketing energy costs put on
their operations, threatening their sur-
vival on the medium to long term.
‘It is a nightmare and it does not look
like this situation will change for the
better soon,’ Jan Visser, managing
director of electronics recycler Mirec
in the Netherlands, told Recycling
International on the sidelines of the
conference. Visser has seen the com-
pany’s energy bills explode in recent
months. ‘In 2021 we spent EUR 300
000 on energy and that has gone up
by a million to EUR 1.3 million,’ he
said. Mirec has an LCD screen line

which Visser calls a ‘major energy con-
sumer’.
At a press meeting as the event got
underway, BIR president Tom Bird
acknowledged that many recyclers
were struggling due to the energy cri-
sis. Asked if the sector will be facing a
situation where companies are forced
to completely shut down operations,
as predicted earlier by the association
of German steel recyclers BDSV, he
replied: ‘Really, I cannot tell. It’s a
huge problem, for sure. But every situ-
ation in every individual company and
country is different.’

CRY FOR HELP
Even so, a week after the convention
BIR urged national governments and
international legislators to give ‘imme-
diate financial aid’ for the recycling
industry to prevent significant long-
term damage to a sector that plays a
pivotal role in the global circular econ-
omy and the protection of the planet.
Meanwhile, Visser says electronics
recycler Mirec has no choice other
than to pass the extra costs onto the
purchase side. ‘Obviously, we are
forced to talk with our material suppli-
ers and pay them less for materials

and services in order to secure our
business for the future.’

PAPER AND PLASTICS
RECYCLERS
The high cost of energy – specifically
gas – is challenging paper recyclers
who cannot pass on this cost to their
customers because demand for their
products is low due to the financial
crisis, observed BIR paper division
chair Francisco Donoso of Dolaf
Servicios Verdes in Spain. ‘Therefore,
the only cost they can manage is what
they pay for their incoming materials,’
he pointed out.
Plastics Committee chairman Henk
Alssema of Vita Plastics in the
Netherlands said the industry in
Europe was ‘reeling under pressure
due to high electricity charges, low
demand for raw materials, low prices,
lack of labour and inflation; it looks
like a mess’. He added that energy
costs, which were normally around
15-20% of production costs for
European recyclers, had recently
jumped to nearer 70%. ‘That’s a huge
problem. Recycling companies are
switching off and we have huge feed-
stocks.’

NEW LIFE FOR 30 000 PAYMENT TERMINALS: ‘REUSE DOES WORK’
Reuse offers great business opportunities, pro-
claims Stavros Mylonas. It is a complementary activ-
ity rather than a competitive one, he told Recycling
International at the conference.
Headquartered in Cyprus, Mylonas is managing direc-
tor of a network of e-scrap recycling companies with
operations in Greece, Italy, Egypt, Lebanon, the
Balkans and several countries in the Gulf region. He
has recently acquired the former Sims Dubai facility,
which has been renamed SafelMS.
Although the main activities are recycling, reuse forms a growing and promising business, he
asserts. ‘But it’s not easy. To make it work it’s important to have patience, it can be tough to
find a new home for devices.’
For example, two years ago the entrepreneur got his hands on 30 000 payment terminals. Who
wants 30 000 discarded terminals? ‘Quite a challenge indeed,’ admits Mylonas. ‘I tried for one
month, two months… and after four months I gave up and decided to scrap them. But then, all
of a sudden, I was approached by an Indonesian buyer who was interested. I sent them some
devices for testing and they said “yes”. So the first tranche was sold. Soon I sold the rest to
buyers in Malaysia and Singapore. All 30 000 units sold for a total of EUR 450 000.’
A good deal but no guarantee for the future, insists Mylonas. ‘Soon after I bought another
load of terminals. Unfortunately, this time I couldn’t find a buyer so the only option was the
shredder. That’s fine, as long as you give reuse a chance.’