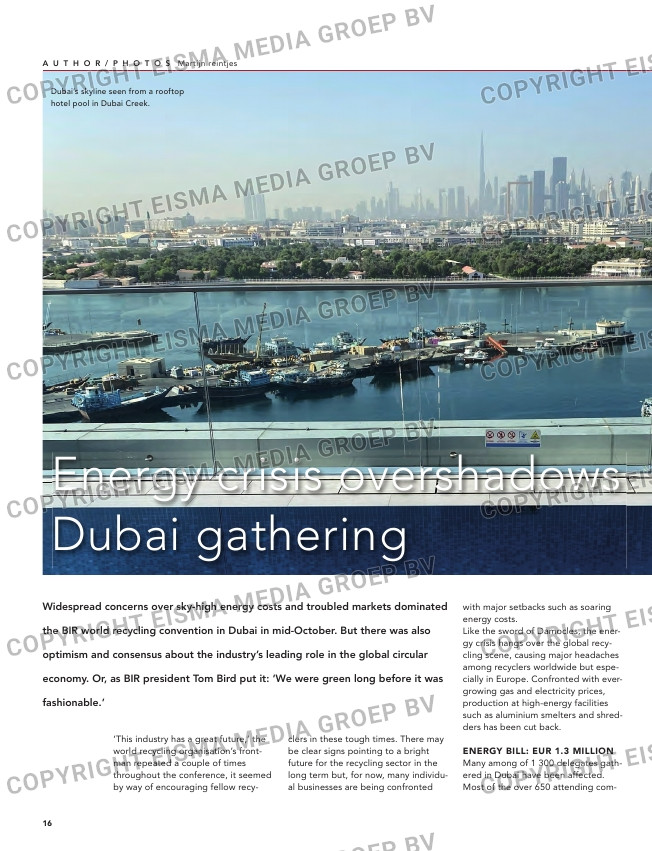 the BIR world recycling convention in Dubai in mid-October. But there was also

economy. Or, as BIR president Tom Bird put it: ‘We were green long before it was

panies reported on the huge burden
that sky-rocketing energy costs put on
their operations, threatening their sur-
vival on the medium to long term.
‘It is a nightmare and it does not look
like this situation will change for the
better soon,’ Jan Visser, managing
director of electronics recycler Mirec
in the Netherlands, told Recycling
International on the sidelines of the
conference. Visser has seen the com-
pany’s energy bills explode in recent
months. ‘In 2021 we spent EUR 300
000 on energy and that has gone up
by a million to EUR 1.3 million,’ he
said. Mirec has an LCD screen line

‘This industry has a great future,’ the
world recycling organisation’s front-
man repeated a couple of times
throughout the conference, it seemed
by way of encouraging fellow recy-

clers in these tough times. There may
be clear signs pointing to a bright
future for the recycling sector in the
long term but, for now, many individu-
al businesses are being confronted

with major setbacks such as soaring
energy costs.
Like the sword of Damocles, the ener-
gy crisis hangs over the global recy-
cling scene, causing major headaches
among recyclers worldwide but espe-
cially in Europe. Confronted with ever-
growing gas and electricity prices,
production at high-energy facilities
such as aluminium smelters and shred-
ders has been cut back.

ENERGY BILL: EUR 1.3 MILLION
Many among of 1 300 delegates gath-
ered in Dubai have been affected.
Most of the over 650 attending com-