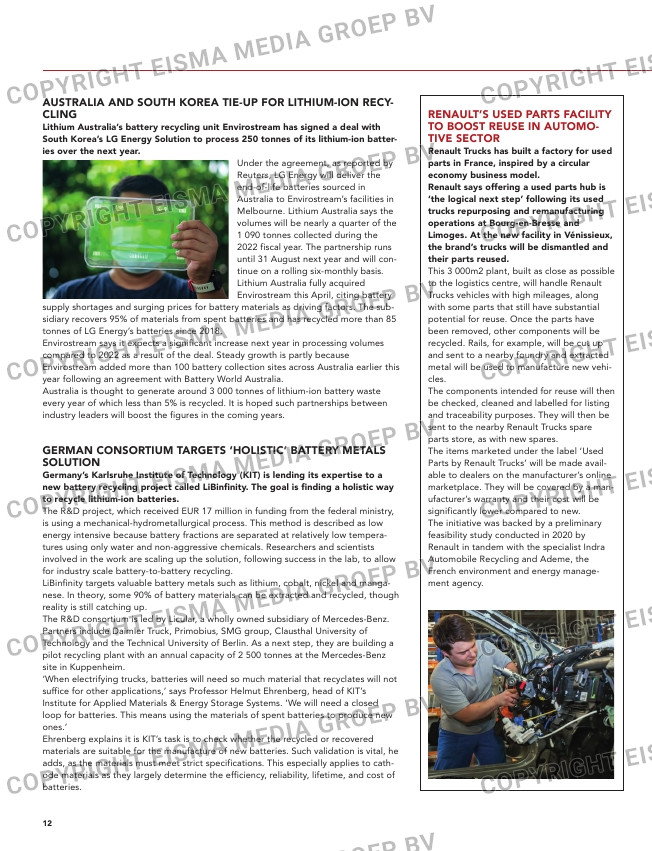 RENAULT’S USED PARTS FACILITY
TO BOOST REUSE IN AUTOMO-
TIVE SECTOR
Renault Trucks has built a factory for used
parts in France, inspired by a circular
economy business model.
Renault says offering a used parts hub is
‘the logical next step’ following its used
trucks repurposing and remanufacturing
operations at Bourg-en-Bresse and
Limoges. At the new facility in Vénissieux,
the brand’s trucks will be dismantled and
their parts reused.
This 3 000m2 plant, built as close as possible
to the logistics centre, will handle Renault
Trucks vehicles with high mileages, along
with some parts that still have substantial
potential for reuse. Once the parts have
been removed, other components will be
recycled. Rails, for example, will be cut up
and sent to a nearby foundry and extracted
metal will be used to manufacture new vehi-
cles.
The components intended for reuse will then
be checked, cleaned and labelled for listing
and traceability purposes. They will then be
sent to the nearby Renault Trucks spare
parts store, as with new spares.
The items marketed under the label ‘Used
Parts by Renault Trucks’ will be made avail-
able to dealers on the manufacturer’s online
marketplace. They will be covered by a man-
ufacturer’s warranty and their cost will be
significantly lower compared to new.
The initiative was backed by a preliminary
feasibility study conducted in 2020 by
Renault in tandem with the specialist Indra
Automobile Recycling and Ademe, the
French environment and energy manage-
ment agency.

Under the agreement, as reported by
Reuters, LG Energy will deliver the
end-of-life batteries sourced in
Australia to Envirostream’s facilities in
Melbourne. Lithium Australia says the
volumes will be nearly a quarter of the
1 090 tonnes collected during the
2022 fiscal year. The partnership runs
until 31 August next year and will con-
tinue on a rolling six-monthly basis.
Lithium Australia fully acquired
Envirostream this April, citing battery

supply shortages and surging prices for battery materials as driving factors. The sub-
sidiary recovers 95% of materials from spent batteries and has recycled more than 85
tonnes of LG Energy’s batteries since 2018.
Envirostream says it expects a significant increase next year in processing volumes
compared to 2022 as a result of the deal. Steady growth is partly because
Envirostream added more than 100 battery collection sites across Australia earlier this
year following an agreement with Battery World Australia.
Australia is thought to generate around 3 000 tonnes of lithium-ion battery waste
every year of which less than 5% is recycled. It is hoped such partnerships between
industry leaders will boost the figures in the coming years.

GERMAN CONSORTIUM TARGETS ‘HOLISTIC’ BATTERY METALS
SOLUTION
Germany’s Karlsruhe Institute of Technology (KIT) is lending its expertise to a
new battery recycling project called LiBinfinity. The goal is finding a holistic way
to recycle lithium-ion batteries.
The R&D project, which received EUR 17 million in funding from the federal ministry,
is using a mechanical-hydrometallurgical process. This method is described as low
energy intensive because battery fractions are separated at relatively low tempera-
tures using only water and non-aggressive chemicals. Researchers and scientists
involved in the work are scaling up the solution, following success in the lab, to allow
for industry scale battery-to-battery recycling.
LiBinfinity targets valuable battery metals such as lithium, cobalt, nickel and manga-
nese. In theory, some 90% of battery materials can be extracted and recycled, though
reality is still catching up.
The R&D consortium is led by Licular, a wholly owned subsidiary of Mercedes-Benz.
Partners include Daimler Truck, Primobius, SMG group, Clausthal University of
Technology and the Technical University of Berlin. As a next step, they are building a
pilot recycling plant with an annual capacity of 2 500 tonnes at the Mercedes-Benz
site in Kuppenheim.
‘When electrifying trucks, batteries will need so much material that recyclates will not
suffice for other applications,’ says Professor Helmut Ehrenberg, head of KIT’s
Institute for Applied Materials & Energy Storage Systems. ‘We will need a closed
loop for batteries. This means using the materials of spent batteries to produce new
ones.’
Ehrenberg explains it is KIT’s task is to check whether the recycled or recovered
materials are suitable for the manufacture of new batteries. Such validation is vital, he
adds, as the materials must meet strict specifications. This especially applies to cath-
ode materials as they largely determine the efficiency, reliability, lifetime, and cost of
batteries.

What of Lubomila Jordanova? She’s the ceo of Plan A, a start-up launched in 2017 to help
companies map out and realise circular operations. Her face graces a recent issue of Forbes
magazine in Bulgaria. In the cover story, she details how ‘greentech’ solutions coupled with
big data and artificial intelligence systems have the power to create a carbon neutral society
without waste.
It’s a hopeful narrative that builds on the raw potential many of us in the recycling industry
have experienced first-hand. One that prompted the Obama Foundation to name her a
‘Leader for Europe for 2022’, alongside 30 other innovative individuals representing many dif-
ferent countries.
‘When starting the business, I was quite naive, yet idealistic in believing that if we have the
data and the science we should be able to use it to make things right for our planet, econo-
my and society,’ Jordanova says. ‘Five years down the line, Plan A has been able to shape
how thousands of businesses think about sustainability and decarbonisation while building a
team of 100+ across the globe.’
Such exposure isn’t wholly surprising in the wake of several documentaries and bestsellers on
the topics of recycling, the circular economy and sustainable design. And let’s not forget
Global Recycling Day, inaugurated in 2018 and now celebrated across the world on 18 March.
And yet, media coverage about recycling-related themes isn’t always favourable – not by a
long shot. There are many doom and gloom stories about illicit waste management schemes,
corruption, metal theft and the dangers of working in scrap.
If you think about it for longer than three seconds, you’ll admit there is more to the global
recycling industry than a couple of quotable headlines. The question is: what do people
remember? And how much do they actually read/watch?
Bad news is usually so much more exciting, coming to us in bite-sized bursts, accompanied
by a tonne of photos and audio commentary. Ideal for sharing and commenting without exer-
cising much critical thinking.
I’m not denying that there are common practices and bad practices besides best practices –
but it’s hard to keep a clear overview when faced with a mountain of information. The bad
stories tend to stick, don’t they? I think it’s time to grab the microphone, pass it around, and
make sure the good ones do, too.
After all, in a world full of people screaming for attention, we have to be our own cheerlead-
ers. I hope recyclers, engineers and other industry stakeholders can put their humility aside
and get comfortable being more vocal.
There’s so much noise out there. Let’s drown it out with something worth saying.

stars on the cover of magazines. I’m glad to say the media landscape has been