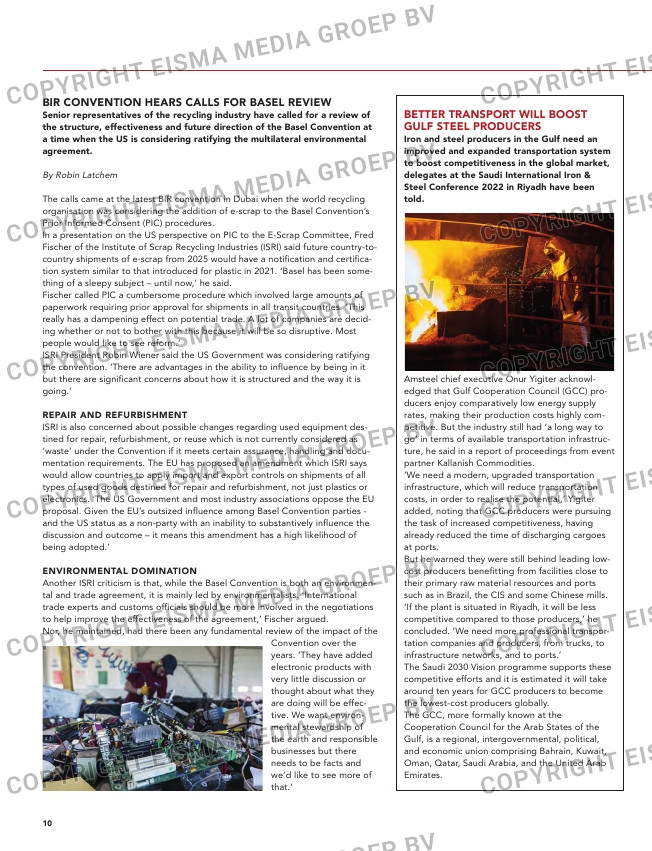 EUROPE’S RECYCLERS CRY FOR
HELP IN ENERGY CRISIS
The dramatic jump in energy prices has
forced European recycling companies
to reduce or entirely suspend produc-
tion, says the European Recycling
Industries Confederation (EuRIC). The
organisation urges policy makers ‘to
enact immediate financial aid’ to pre-
vent significant long-term damage to
European recycling.
‘Recycling is an intricate process that
operates uninterrupted seven days a
week,’ says EuRIC president says Olivier
François. ‘We cannot simply turn our pro-
duction on and off like a light switch.
Europe’s recyclers are unable to cope
with soaring energy costs and this poses
a direct threat to Europe’s climate neutral
and circular economy ambitions and to
the green local jobs we sustain.’
The recycling industry body also stresses
that while the recycling industry has
grown steadily in Europe, driven largely
by vibrant entrepreneurship and incen-
tives to use more recycled materials in
products, only 12% of materials used in
production in the EU come from recy-
cling. ‘Mounting energy prices are now
reversing this progress, bringing recycling
companies and particularly SMEs, to their
knees’.
EuRIC stresses that recycling not only
saves significant CO2 emissions but also
energy when compared to extracted raw
materials. ‘Therefore, we urge European
policymakers to act coherently to incen-
tivise the use of recycled materials
through implementation of carbon cred-
its, green public procurement and bind-
ing recycled content targets.’

BETTER TRANSPORT WILL BOOST
GULF STEEL PRODUCERS
Iron and steel producers in the Gulf need an
improved and expanded transportation system
to boost competitiveness in the global market,
delegates at the Saudi International Iron &
Steel Conference 2022 in Riyadh have been
told.

Amsteel chief executive Onur Yigiter acknowl-
edged that Gulf Cooperation Council (GCC) pro-
ducers enjoy comparatively low energy supply
rates, making their production costs highly com-
petitive. But the industry still had ‘a long way to
go’ in terms of available transportation infrastruc-
ture, he said in a report of proceedings from event
partner Kallanish Commodities.
‘We need a modern, upgraded transportation
infrastructure, which will reduce transportation
costs, in order to realise the potential,’ Yigiter
added, noting that GCC producers were pursuing
the task of increased competitiveness, having
already reduced the time of discharging cargoes
at ports.
But he warned they were still behind leading low-
cost producers benefitting from facilities close to
their primary raw material resources and ports
such as in Brazil, the CIS and some Chinese mills.
‘If the plant is situated in Riyadh, it will be less
competitive compared to those producers,’ he
concluded. ‘We need more professional transpor-
tation companies and producers, from trucks, to
infrastructure networks, and to ports.’
The Saudi 2030 Vision programme supports these
competitive efforts and it is estimated it will take
around ten years for GCC producers to become
the lowest-cost producers globally.
The GCC, more formally known at the
Cooperation Council for the Arab States of the
Gulf, is a regional, intergovernmental, political,
and economic union comprising Bahrain, Kuwait,
Oman, Qatar, Saudi Arabia, and the United Arab
Emirates.

BIR CONVENTION HEARS CALLS FOR BASEL REVIEW
Senior representatives of the recycling industry have called for a review of
the structure, effectiveness and future direction of the Basel Convention at
a time when the US is considering ratifying the multilateral environmental
agreement.

The calls came at the latest BIR convention in Dubai when the world recycling
organisation was considering the addition of e-scrap to the Basel Convention’s
Prior Informed Consent (PIC) procedures.
In a presentation on the US perspective on PIC to the E-Scrap Committee, Fred
Fischer of the Institute of Scrap Recycling Industries (ISRI) said future country-to-
country shipments of e-scrap from 2025 would have a notification and certifica-
tion system similar to that introduced for plastic in 2021. ‘Basel has been some-
thing of a sleepy subject – until now,’ he said.
Fischer called PIC a cumbersome procedure which involved large amounts of
paperwork requiring prior approval for shipments in all transit countries. ‘This
really has a dampening effect on potential trade. A lot of companies are decid-
ing whether or not to bother with this because it will be so disruptive. Most
people would like to see reform.’
ISRI President Robin Wiener said the US Government was considering ratifying
the convention. ‘There are advantages in the ability to influence by being in it
but there are significant concerns about how it is structured and the way it is
going.’

REPAIR AND REFURBISHMENT
ISRI is also concerned about possible changes regarding used equipment des-
tined for repair, refurbishment, or reuse which is not currently considered as
‘waste’ under the Convention if it meets certain assurance, handling and docu-
mentation requirements. The EU has proposed an amendment which ISRI says
would allow countries to apply import and export controls on shipments of all
types of used goods destined for repair and refurbishment, not just plastics or
electronics. ‘The US Government and most industry associations oppose the EU
proposal. Given the EU’s outsized influence among Basel Convention parties –
and the US status as a non-party with an inability to substantively influence the
discussion and outcome – it means this amendment has a high likelihood of
being adopted.’

ENVIRONMENTAL DOMINATION
Another ISRI criticism is that, while the Basel Convention is both an environmen-
tal and trade agreement, it is mainly led by environmentalists. ‘International
trade experts and customs officials should be more involved in the negotiations
to help improve the effectiveness of the agreement,’ Fischer argued.
Nor, he maintained, had there been any fundamental review of the impact of the

Convention over the
years. ‘They have added
electronic products with
very little discussion or
thought about what they
are doing will be effec-
tive. We want environ-
mental stewardship of
the earth and responsible
businesses but there
needs to be facts and
we’d like to see more of
that.’