Subscribe
PAPERMARKET ANALYSIS High supply keeps OCC prices in check The lowest prices for years and low demand from Asia have prompted stockpiling in the US and a growth in more domestic processing. Recovered paper traders in the US in late ...
Read the entire page 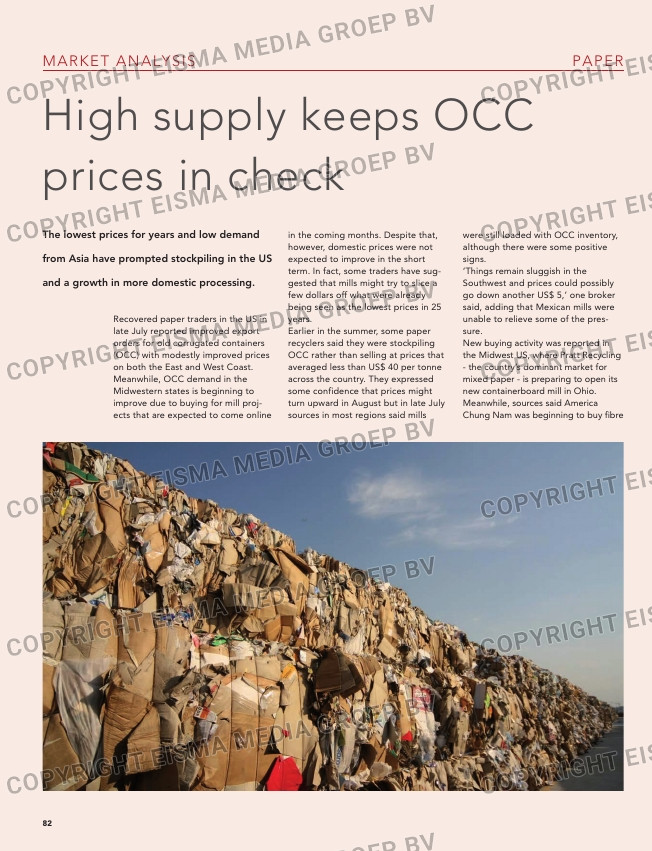 from Asia have prompted stockpiling in the US

and a growth in more domestic processing.

Recovered paper traders in the US in
late July reported improved export
orders for old corrugated containers
(OCC) with modestly improved prices
on both the East and West Coast.
Meanwhile, OCC demand in the
Midwestern states is beginning to
improve due to buying for mill proj-
ects that are expected to come online

were still loaded with OCC inventory,
although there were some positive
signs.
‘Things remain sluggish in the
Southwest and prices could possibly
go down another US$ 5,’ one broker
said, adding that Mexican mills were
unable to relieve some of the pres-
sure.
New buying activity was reported in
the Midwest US, where Pratt Recycling
– the country’s dominant market for
mixed paper – is preparing to open its
new containerboard mill in Ohio.
Meanwhile, sources said America
Chung Nam was beginning to buy fibre

THE BIR VIEW
Jean-Luc Petithuguenin, president of the BIR recovered paper division,
writes:
‘In the lower grade market, Chinese buyers are absent for the time being.
There is no need to remind you that they do not have enough quotas to
meet their needs and that their imports are limited to a few sources such
as Japan and the USA.’ The South East Asian market is overflowing with
offers of material from the USA, the UK and elsewhere. Prices are under
pressure and sharp thinking is required when placing orders.
Petithuguenin notes that Indonesia shut its doors to imports in June,
although new regulations based on ISRI specifications had been agreed
and controls were gradually being put in place. Industry sources said
restrictions imposed by China and Taiwan were being exacerbated by
Indonesia’s move and this was having a big effect on the market. Prices for
OCC were very low at around US$ 100. Freight rates are expected to stay
the same until after the summer.
Looking ahead to the second half of the year, the president adds: ‘There
are few positive signs at present. New machines will be arriving on the
market within a year and beyond. We also have to keep in mind that
Chinese quotas should fall by 50% next year to around six million tonnes.
The market is cyclic, so we have to expect that the wheel of fortune will
turn and the market will set off again.’

in the coming months. Despite that,
however, domestic prices were not
expected to improve in the short
term. In fact, some traders have sug-
gested that mills might try to slice a
few dollars off what were already
being seen as the lowest prices in 25
years.
Earlier in the summer, some paper
recyclers said they were stockpiling
OCC rather than selling at prices that
averaged less than US$ 40 per tonne
across the country. They expressed
some confidence that prices might
turn upward in August but in late July
sources in most regions said mills

for the Nine Dragons Paper recycled
pulp and containerboard lines in
Wisconsin and Maine. The mills are