Subscribe
NON-FERROUSMARKET ANALYSIS 80 authorities before the end of the year. In contrast to Aurubis, Novelis released its full year results shortly after the pre- vious issue of Recycling International went to press. It reported record results...
Read the entire page 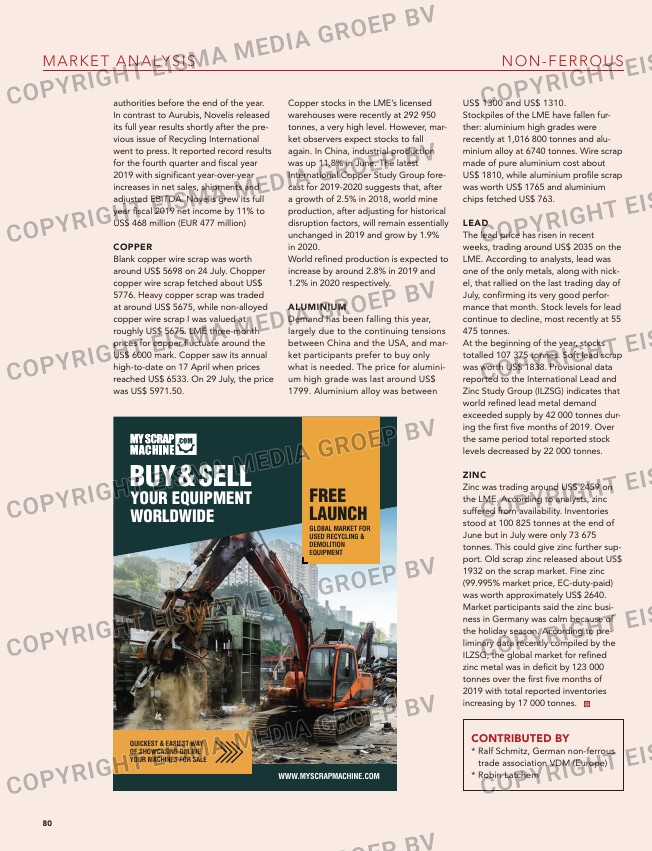 authorities before the end of the year.
In contrast to Aurubis, Novelis released
its full year results shortly after the pre-
vious issue of Recycling International
went to press. It reported record results
for the fourth quarter and fiscal year
2019 with significant year-over-year
increases in net sales, shipments and
adjusted EBITDA. Novelis grew its full
year fiscal 2019 net income by 11% to
US$ 468 million (EUR 477 million)

Copper stocks in the LME’s licensed
warehouses were recently at 292 950
tonnes, a very high level. However, mar-
ket observers expect stocks to fall
again. In China, industrial production
was up 11.8% in June. The latest
International Copper Study Group fore-
cast for 2019-2020 suggests that, after
a growth of 2.5% in 2018, world mine
production, after adjusting for historical
disruption factors, will remain essentially
unchanged in 2019 and grow by 1.9%
in 2020.
World refined production is expected to
increase by around 2.8% in 2019 and
1.2% in 2020 respectively.

ALUMINIUM
Demand has been falling this year,
largely due to the continuing tensions
between China and the USA, and mar-
ket participants prefer to buy only
what is needed. The price for alumini-
um high grade was last around US$
1799. Aluminium alloy was between

LEAD
The lead price has risen in recent
weeks, trading around US$ 2035 on the
LME. According to analysts, lead was
one of the only metals, along with nick-
el, that rallied on the last trading day of
July, confirming its very good perfor-
mance that month. Stock levels for lead
continue to decline, most recently at 55
475 tonnes.
At the beginning of the year, stocks
totalled 107 375 tonnes. Soft lead scrap
was worth US$ 1838. Provisional data
reported to the International Lead and
Zinc Study Group (ILZSG) indicates that
world refined lead metal demand
exceeded supply by 42 000 tonnes dur-
ing the first five months of 2019. Over
the same period total reported stock
levels decreased by 22 000 tonnes.

ZINC
Zinc was trading around US$ 2459 on
the LME. According to analysts, zinc
suffered from availability. Inventories
stood at 100 825 tonnes at the end of
June but in July were only 73 675
tonnes. This could give zinc further sup-
port. Old scrap zinc released about US$
1932 on the scrap market. Fine zinc
(99.995% market price, EC-duty-paid)
was worth approximately US$ 2640.
Market participants said the zinc busi-
ness in Germany was calm because of
the holiday season. According to pre-
liminary data recently compiled by the
ILZSG, the global market for refined
zinc metal was in deficit by 123 000
tonnes over the first five months of
2019 with total reported inventories
increasing by 17 000 tonnes.

QUICKEST & EASIEST WAY
OF SHOWCASING ONLINE
YOUR MACHINES FOR SALE