Subscribe
8 RUSSIA SHOWS HOW TO RECYCLE MILITARY BATTERIES Submarines and military fighters are powered by large alkaline batteries weighing almost 14 tonnes. Although such batteries last for up to 12 years, scientists from Moscow believe they ha...
Read the entire page 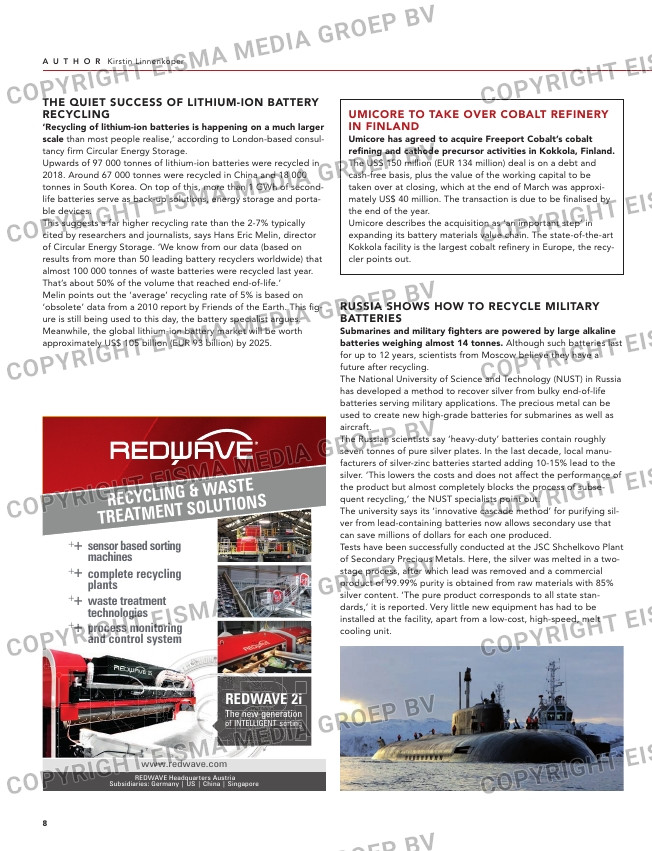 RUSSIA SHOWS HOW TO RECYCLE MILITARY
BATTERIES
Submarines and military fighters are powered by large alkaline
batteries weighing almost 14 tonnes. Although such batteries last
for up to 12 years, scientists from Moscow believe they have a
future after recycling.
The National University of Science and Technology (NUST) in Russia
has developed a method to recover silver from bulky end-of-life
batteries serving military applications. The precious metal can be
used to create new high-grade batteries for submarines as well as
aircraft.
The Russian scientists say ‘heavy-duty’ batteries contain roughly
seven tonnes of pure silver plates. In the last decade, local manu-
facturers of silver-zinc batteries started adding 10-15% lead to the
silver. ‘This lowers the costs and does not affect the performance of
the product but almost completely blocks the process of subse-
quent recycling,’ the NUST specialists point out.
The university says its ‘innovative cascade method’ for purifying sil-
ver from lead-containing batteries now allows secondary use that
can save millions of dollars for each one produced.
Tests have been successfully conducted at the JSC Shchelkovo Plant
of Secondary Precious Metals. Here, the silver was melted in a two-
stage process, after which lead was removed and a commercial
product of 99.99% purity is obtained from raw materials with 85%
silver content. ‘The pure product corresponds to all state stan-
dards,’ it is reported. Very little new equipment has had to be
installed at the facility, apart from a low-cost, high-speed, melt
cooling unit.

THE QUIET SUCCESS OF LITHIUM-ION BATTERY
RECYCLING
‘Recycling of lithium-ion batteries is happening on a much larger
scale than most people realise,’ according to London-based consul-
tancy firm Circular Energy Storage.
Upwards of 97 000 tonnes of lithium-ion batteries were recycled in
2018. Around 67 000 tonnes were recycled in China and 18 000
tonnes in South Korea. On top of this, more than 1 GWh of second-
life batteries serve as back-up solutions, energy storage and porta-
ble devices.
This suggests a far higher recycling rate than the 2-7% typically
cited by researchers and journalists, says Hans Eric Melin, director
of Circular Energy Storage. ‘We know from our data (based on
results from more than 50 leading battery recyclers worldwide) that
almost 100 000 tonnes of waste batteries were recycled last year.
That’s about 50% of the volume that reached end-of-life.’
Melin points out the ‘average’ recycling rate of 5% is based on
‘obsolete’ data from a 2010 report by Friends of the Earth. This fig-
ure is still being used to this day, the battery specialist argues.
Meanwhile, the global lithium-ion battery market will be worth
approximately US$ 105 billion (EUR 93 billion) by 2025.

UMICORE TO TAKE OVER COBALT REFINERY
IN FINLAND
Umicore has agreed to acquire Freeport Cobalt’s cobalt
refining and cathode precursor activities in Kokkola, Finland.
The US$ 150 million (EUR 134 million) deal is on a debt and
cash-free basis, plus the value of the working capital to be
taken over at closing, which at the end of March was approxi-
mately US$ 40 million. The transaction is due to be finalised by
the end of the year.
Umicore describes the acquisition as ‘an important step’ in
expanding its battery materials value chain. The state-of-the-art
Kokkola facility is the largest cobalt refinery in Europe, the recy-
cler points out.