Subscribe
75recyclinginternational.com | July/August | 2019 FERROUS Over the first quarter of 2019, China imported 340.21 million tonnes of iron ore, down 3.7% over the same period a year before. Import volumes moved back up in May to 83.75...
Read the entire page 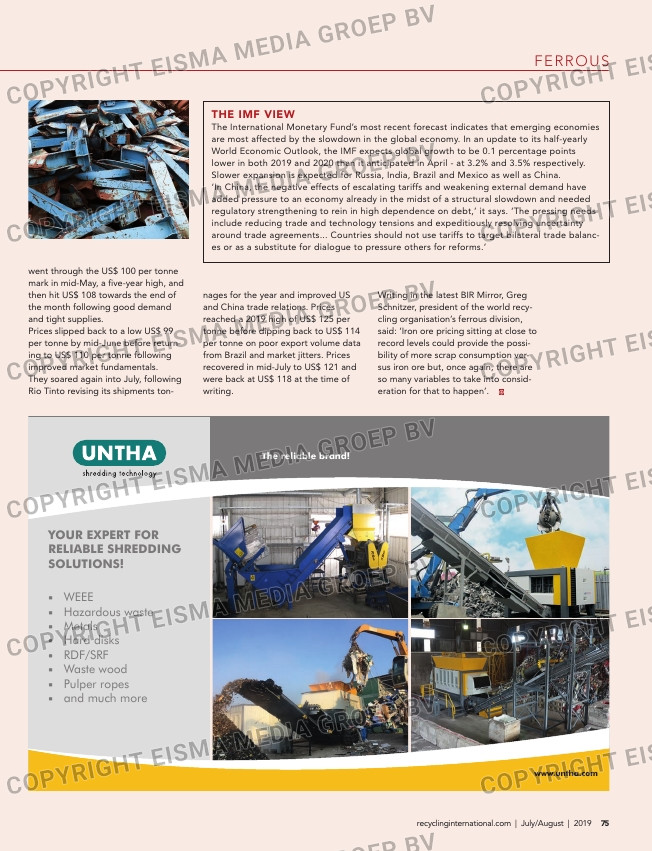 Over the first quarter of 2019, China
imported 340.21 million tonnes of iron
ore, down 3.7% over the same period
a year before. Import volumes moved
back up in May to 83.75 million tonnes,
a 3.7% increase on April but 11% down
from May 2018.
In June, Australian iron ore imports
reached 75.18 million tonnes, down
from 83.24 million tonnes in June
2018.
Prices for iron ore reached were rela-
tively stable towards the end of April
and into May, at around US$ 93 per
tonne, according to Metal Bulletin’s re-
named 62% Fe Iron Ore index price,
published by Fastmarkets. But they

went through the US$ 100 per tonne
mark in mid-May, a five-year high, and
then hit US$ 108 towards the end of
the month following good demand
and tight supplies.
Prices slipped back to a low US$ 99
per tonne by mid-June before return-
ing to US$ 110 per tonne following
improved market fundamentals.
They soared again into July, following
Rio Tinto revising its shipments ton-

THE IMF VIEW
The International Monetary Fund’s most recent forecast indicates that emerging economies
are most affected by the slowdown in the global economy. In an update to its half-yearly
World Economic Outlook, the IMF expects global growth to be 0.1 percentage points
lower in both 2019 and 2020 than it anticipated in April – at 3.2% and 3.5% respectively.
Slower expansion is expected for Russia, India, Brazil and Mexico as well as China.
‘In China, the negative effects of escalating tariffs and weakening external demand have
added pressure to an economy already in the midst of a structural slowdown and needed
regulatory strengthening to rein in high dependence on debt,’ it says. ‘The pressing needs
include reducing trade and technology tensions and expeditiously resolving uncertainty
around trade agreements… Countries should not use tariffs to target bilateral trade balanc-
es or as a substitute for dialogue to pressure others for reforms.’

YOUR EXPERT FOR
RELIABLE SHREDDING
SOLUTIONS!

nages for the year and improved US
and China trade relations. Prices
reached a 2019 high of US$ 125 per
tonne before dipping back to US$ 114
per tonne on poor export volume data
from Brazil and market jitters. Prices
recovered in mid-July to US$ 121 and
were back at US$ 118 at the time of
writing.

Writing in the latest BIR Mirror, Greg
Schnitzer, president of the world recy-
cling organisation’s ferrous division,
said: ‘Iron ore pricing sitting at close to
record levels could provide the possi-
bility of more scrap consumption ver-
sus iron ore but, once again, there are
so many variables to take into consid-
eration for that to happen’.