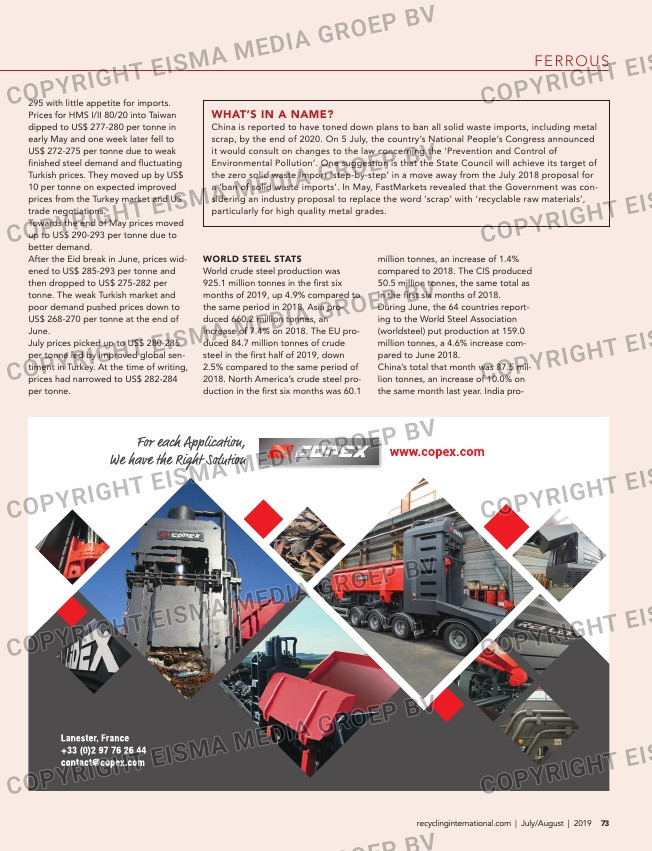 295 with little appetite for imports.
Prices for HMS I/II 80/20 into Taiwan
dipped to US$ 277-280 per tonne in
early May and one week later fell to
US$ 272-275 per tonne due to weak
finished steel demand and fluctuating
Turkish prices. They moved up by US$
10 per tonne on expected improved
prices from the Turkey market and US
trade negotiations.
Towards the end of May prices moved
up to US$ 290-293 per tonne due to
better demand.
After the Eid break in June, prices wid-
ened to US$ 285-293 per tonne and
then dropped to US$ 275-282 per
tonne. The weak Turkish market and
poor demand pushed prices down to
US$ 268-270 per tonne at the end of
June.
July prices picked up to US$ 280-285
per tonne led by improved global sen-
timent in Turkey. At the time of writing,
prices had narrowed to US$ 282-284
per tonne.

WHAT’S IN A NAME?
China is reported to have toned down plans to ban all solid waste imports, including metal
scrap, by the end of 2020. On 5 July, the country’s National People’s Congress announced
it would consult on changes to the law concerning the ‘Prevention and Control of
Environmental Pollution’. One suggestion is that the State Council will achieve its target of
the zero solid waste import ‘step-by-step’ in a move away from the July 2018 proposal for
a ‘ban of solid waste imports’. In May, FastMarkets revealed that the Government was con-
sidering an industry proposal to replace the word ‘scrap’ with ‘recyclable raw materials’,
particularly for high quality metal grades.